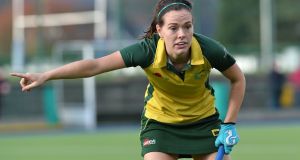 The Jacqui Potter Cup final at Grange Road on St Patrick’s Day will be a repeat of last year’s decider in the competition with holders Railway Union beating North Kildare in the semi-finals this week and UCD getting past Monkstown.

Niamh Carey and Jodie Douglas got the goals for Railway that ended North Kildare’s impressive run, while a double from Katherine Egan and one from Abbie Russell gave the students a 3-0 win over Monkstown.  The Hockey League has been the chief focus for both sides this season who have largely opted to field more youthful line-ups in the Jacqui Potter Cup, Railway taking full advantage of UCD doing just that in last year’s final when they beat them 7-0 with the help of a Zara Delany hat-trick.

With five of their players on international duty this week for Ireland’s series of matches against England at Bisham Abbey, the first two lost 4-0 and 5-2, UCD are unlikely to be at full strength this time around either.

If Railway can take advantage again, then they’ll have a chance of doing the double on the day, the club also in the Junior final with Muckross their opponents.