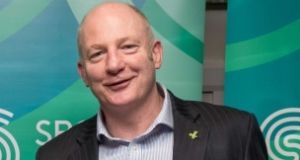 Hamish Adams, outgoing chief executive, Rowing Ireland: named the Get Going, Get Rowing programme, which introduces young people to the sport, as a highlight of his time in charge

The president of Rowing Ireland, Eamonn Colclough, says the board will move quickly to put in place a successor to Hamish Adams, who announced his resignation as chief executive. Adams will join Athletics Ireland as chief executive on May 1st. Colclough paid tribute to the New Zealander and said it was a time of opportunity for the sport, with such a lot of change happening.

Speaking to The Irish Times, Adams said he was proud of his five years with rowing. He cited the growth in numbers taking part and in the profile of the sport; the adoption of good governance methods; the increase in the staff resources (from four to 12) and the placing of Rowing Ireland on a sound financial footing. He picked out for praise the Get Going, Get Rowing programme, which introduces young people to the sport.

“Rowing is in a better place than when I started,” he said.

Adams sometimes came into conflict with high performance athletes, and recently drew criticism for instituting a disciplinary process against Sanita Puspure after she sent a critical tweet. The New Zealander is in no way apologetic. “I am very comfortable with how that was handled.”

The next chief executive would, ideally, match Adams’ work ethic and build on the strong base with a bit of marketing elan which would bring more sponsorship into the sport.

One challenge to rowing perhaps outweighs the rest – the changing climate. The Tribesmen Head of the River, set for Saturday on Lough Rynn, was cancelled because of a forecast of heavy rain and gale force gusts – it may be held in March. The St Michael’s head, on February 24th, has been moved to Limerick because of flooding at O’Briens’ Bridge. Over the past three years an alarming number of heads of the river and even regattas have been cancelled because of weather concerns.

The problem is not limited to rowing. In Britain, where six of the seven wettest years on record have occurred since 2000, a new report by the Climate Coalition predicts “cancelled football matches, flooded cricket grounds and golf courses crumbling into the sea”.

One way around the challenge for rowing clubs has been to hold warm weather camps abroad, but this is hardly a long-term solution. Perhaps clubs should grasp the nettle and plan an expansion of gym and ergometer capacity so that indoor events could be slotted in alongside or as alternatives to on-the-water competition at this time of the year.

Paul and Gary O’Donovan and Mark O’Donovan and Shane O’Driscoll have no such worries just now as they prepare for the New Zealand Championships, which start on Tuesday.

Ireland lightweight coach Dominic Casey is pleased with their training. “They’ve been doing good mileage,” he told The Irish Times. Casey said that Lake Karapiro is very similar to the National Rowing Centre, their usual base – though the temperatures are in the 20s.

The four athletes have become more accustomed to the time difference. But Casey warned against expecting too much in competition, given that the local rowers are performing in their summer.

Casey will travel back to Ireland after the championships, while the rowers go on to Sydney to train and compete. They will be based there until the end of March.

On the south Atlantic, solo oarsman Damian Browne has posted a video of high waves and howling winds as he enters what should be his last week of the Atlantic Challenge. “You’ve got to keep fighting, right to the end,” the Galway man says.