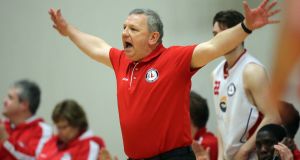 With just five weekends left in regular season, things are certainly heating up across the men’s and women’s Super Leagues, with all eyes now firmly focused on the coveted spots at the top of the table.

In the women’s Super League an interesting battle is in store as Courtyard Liffey Celtics have bounced up to the top of the table, overtaking DCU Mercy for top honours after beating the cup champions 61-57 in Leixlip last weekend.

They will need to focus though if they are to keep that position though, as Mercy and Ambassador UCC Glanmire are directly behind them in joint second place, and need Liffey to drop just one game in order to be in with a chance to move to the top.

This tussle for top spots makes the weekend’s games all the more interesting, as Liffey Celtics face one of the toughest tests with a trip to Cork to face an in-form Singleton SuperValu Brunell on Sunday. Brunell are currently battling for a coveted top-four spot in the league so will be targeting this game as one to win, and Celtics will need to be on top form to overcome the Cork team in their home court.

Pyrobel Killester will also need to take home a win this weekend as they travel to Portlaoise to face the Panthers and, with Brunell snapping at their heels, they can’t afford to drop a game either.

Over in the men’s Super League things are just as interesting as, thanks to an upset by DCU Saints last weekend which saw them overcome league leaders UCD Marian, the top of the table is now closer than ever, with Tralee, Swords, Templeogue and Killester all chasing top spots.

With that in mind, all eyes will be on the IWA in Clontarf on Saturday evening as Pyrobel Killester welcomes UCD Marian for what is set to be a very interesting clash. The sides have already met twice this year, with Killester taking the win in the League while UCD Marian won the Cup clash, so this is set to be another close battle.

DCU Saints welcome Griffith College Swords Thunder on Saturday evening, with Thunder aiming to get one back on the Saints as DCU have won both of their encounters so far this season.

Elsewhere, Black Amber Templeogue will travel to Maree, Eanna will welcome Garvey’s Tralee Warriors and KUBS and Moycullen will do battle in Greendale on Saturday night.

The Basketball Ireland player and coaches of the month for January were also announced this week. In the men’s Super League, it’s a double win for 2018 Pat Duffy National Cup champions Black Amber Templeogue, as Lorcan Murphy has been awarded the player of the month award while head coach Mark Keenan has scooped the Super League Coach of the Month award.

In the Men’s Division One, Cup-winning coach Kieran O’Sullivan of Ballincollig has scooped the award for January, while Ballincollig star Cameron Clark has won the Player of the Month gong.