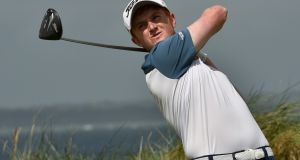 Ronan Mullarney driving at the 7th tee in the matchplay round two of the AIG 2019 Irish Amateur Close Championship at Ballybunion Golf Club. Photograph: Pat Cashman

Southwest winds gusting to 50mph proved no impediment to leading qualifier Ronan Mullarney as he battled his way in the last 16 of the AIG Irish Amateur Close at Ballybunion.

The silver medal winner from Galway admitted he had to rely on some old-fashioned “ground hurling” to earn a showdown with Mountrath’s Niall Hearns for a place in Tuesday afternoon’s quarter-finals.

“This afternoon was ground hurling,” joked Mullarney, who beat Co Sligo’s Ruairi O’Connor 6 & 5 before conditions deteriorated further and he had to dig deep to see off the combative Marc Boucher from Carton House 4 & 3.

“It was really tough this afternoon. I was blown off a lot of shots. It was a good test. I’m from Galway; I’m used to that ground hurling. I’ve played it enough times. The wind was really strong this afternoon. I had 155 yards on the 11th, and I hit three-iron. One-fifty-five is an eight-iron. Now, I only chipped a three-iron but anything that gets up, goes up.”

The opening day of matchplay combat threw up its share of surprises, and while Naas’s Robert Brazill remains on track for a win that would seal the Bridgestone Order of Merit, Ardee’s Evan Farrell handed Douglas international Peter O’Keeffe a 5 & 4 first-round defeat before going on to beat Mullingar’s Liam Grehan, a recent semi-finalist in the “North”, by 6 & 5.

The winner will then take an equally tough task against the resurgent Warrenpoint international Colm Campbell or Dundalk’s Eoin Murphy, a recent Barton Shield winner in Leinster.

Campbell only returned to the championship scene this year after more than a year out with a hand injury. But the former East of Ireland and Irish Amateur Open winner is determined to have a big week and secure his return to the Irish team for the Home Internationals at Lahinch in September.

“I had a couple of sticky games there today playing two Castle players, Peter McKeever and Robert Moran,” said Campbell, who beat McKeever 3 & 2 and Moran 3 & 1. “I played nicely. It was real tough conditions, wet and windy. Getting anywhere around the green was a good shot on 10, 11 and 12.”

He lies fourth in the Bridgestone Order of Merit ahead of next week’s final-counting Mullingar Scratch Trophy and believes he’s made a good case for selection, with the top three points-winners earning automatic call-ups for Lahinch.

“I think I’ve proven myself since I came back from injury with a win at the Ulster Stroke Play and a third at the East, quarter-finals at the North,” he said.

“It was a matter of getting my confidence up and playing good golf. Thankfully I’m starting to do that again.”

Match Play - Round One