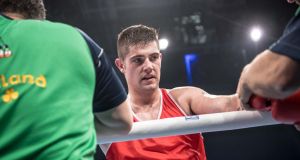 Ward, who was seeking to upgrade the silver medal he won in Doha in 2015, to gold, just couldn’t track down the elusive 29-year-old Cruz, who has now collected four successive World titles in the light heavyweight division.

“I had my moments in the fight,” said Ward. “Cruz boxed really well. He was really composed. It was a good fight. He’s an excellent boxer. He is four times world champion and has an Olympic gold medal. He’s about the only one who can beat me.”

That assertion, Ward proved this week although in Cruz he faced a boxer, who is unorthodox but brilliantly fast. The Moate southpaw sought to close down the ring but each time he had it cornered off Cruz danced his way out flicking up scoring shots as he left.

It was a game of cat and mouse with Ward coming forward and Cruz staying at just arms length banging in lefts and rights from his waist.

For athleticism and elusiveness there is no boxer to touch Cruz but Ward stuck to his task and in all three rounds he was scoring.

In the end he just could not nail the Cuban. He did get in close on several occasions and aimed to land some heavy scoring. But it was too infrequent and Cruz with his weaving and ducking backwards, was never a still target.

“That was the plan,” said Ward about tagging Cruz. “The plan was to close down the ring, try and attack him when he was on the ropes. As I said I had my success in it. I wasn’t a million miles away.

“He was more composed probably in certain areas of the ring. But there’s not a massive amount between the two of us. Two world class athletes.”

That’s certainly true for the Irish 23-year-old, who will grow further with the week’s success. This year has been kind to him when last year in Rio was so cruel. A European gold and a world silver in the last 12 months probably ranks as one of the greatest recoveries in Irish boxing. And Ward has also Cruz in his sights.

“I’m always getting closer,” said the 23-year-old. “I am telling you that within the next couple of years, I will get him.”