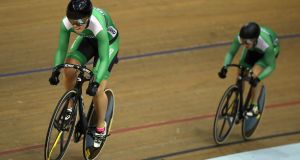 Robyn Stewart headed to the track world championships in Apeldoorn, Netherlands, as the first Irish rider to compete in the women’s sprint. She rode the qualifying round on Thursday afternoon, recording a time of 11.36 seconds over the 200 metres and finishing 24th.

Stewart progressed through to the match sprint rounds, also ending up 24th there. She is gaining vital experience at the world level prior to riding the Commonwealth Games for Northern Ireland in April.

The Irish campaign began on Wednesday when Lydia Gurley had an aggressive showing in the women’s scratch race. She went clear with 10 laps to go and joined forces with Austria’s Verena Eberhardt in trying to stay clear, but was unfortunately overhauled before the line. She placed 15th.

In addition to Stewart, Marc Potts was due to compete on Thursday, riding the men’s scratch race. Also competing in the championships this week are Lydia Boylan, Mark Downey and Felix English, who each have the ability to aim for medals.

Meanwhile three Irish riders will line out in Paris-Nice, starting on Sunday. Sam Bennett won a stage last year and has had a mixed start to the season, but won the Towards Zero Race Melbourne in January.

Also riding are Dan Martin and Nicolas Roche. Martin is heading the UAE Team Emirates squad and showed strong form recently in his first race of the year, the Volta ao Algarve. He was fourth on a mountain stage there en route to 14th overall, and tends to build form as the season progresses.

Martin was third, fifth and sixth on stages of Paris-Nice last year and took a superb third overall. As for his first cousin Roche, he will be part of the BMC Racing Team lineup in the event. According to the team, he will be playing a support role for the American Tejay van Garderen.

Roche is riding the Giro d’Italia in May and is using the races before then to build form.

At home, the dangerous weather conditions have forced the cancellation of a number of early-season events. The Travers Engineering Annaclone GP, the Mick Lally Memorial and the Cycleways Cup had all been cancelled.

It remains to be seen if any of the other events scheduled for the weekend will go ahead.

Stephen Kenny: Ireland reaching the Euros would be ‘extraordinary’ 15:33
Ben Youngs pens a new deal with Leicester 12:05
Solskjær says United’s unbeaten run is ‘nowhere near’ enough 11:53
Eric Dier given four-game ban for confronting fan in the stands 10:59
A glimpse of rugby’s future; assessing Herbert Chapman’s impact on soccer 07:15
Here is your handy guide to sport on television this week