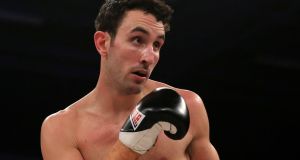 The boxer Scott Westgarth has died in hospital after winning an English title eliminator against Dec Spelman in Doncaster.

The 31-year-old light heavyweight collapsed in his dressing room at The Dome on Saturday following his victory on points over 10 rounds against Spelman.

Stefy Bull, his promoter, said on Twitter: “To promote a boxing show and a young man doing a job he loves losing his life, I have no words. RIP lad thoughts go out to your family and your team, it’s been the hardest few days I’ve had to endure.”

Westgarth suffered a knockdown in the fight but finished victorious and appeared to be in pain as he took part in post-match interviews. He then fell ill, leading to the cancellation of the night’s other bouts.

His devastated opponent Spelman paid tribute to Westgarth. He tweeted: “Absolutely heartbroken and lost for words. I’ll continue to pray for Scott’s family and the people close to him rest easy my friend.”

Westgarth, who was considered the underdog for the bout with Spelman, had a record before the fight of six wins, two losses and a draw.