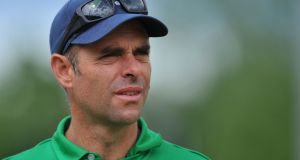 Irish coach Craig Fulton has criticised the change in format of the World Cup, which takes place in Bhubaneswar, India at the end of the year.

The International Hockey Federation (FIH) have introduced a new look tournament in which there are no classification matches, thus departing from the format of traditional events.

The 16 team competition has four pools of four teams with the last placed team in each pool going home after the pool phase.

It means that some nations may only play three pool matches if they do not qualify for the knockout stages of the competition, whereas in the past each team was assured of seven matches right down to the bottom two places.

The event organisers will obviously hope that home side India will survive the early rounds or the tournament will be left without a home team playing, which in India is a big crowd puller. The Kilinga Stadium, where the matches are being staged, has a capacity 15,000, which will be full for the Indian matches.

Missing out on a possible meeting between India and Pakistan, who are in different pools, would also deprive the sport of one of the great grudge matches in world hockey.

“I don’t agree with not playing any classification matches which is a real shame in this World Cup,” said Fulton.

“Worst case scenario is you could potentially only play three pool games and then go home, when in the past you played seven games to a final position and that’s real value for money”.

In the draw that was made this week, Ireland are included in Pool B alongside world number one side Australia, who Ireland play first on November 30th. The two sides rarely meet but will do in a warm up event, the Azlan Shah tournament in Malaysia on March 3rd, in which both sides are participating.

Ireland’s second match comes on December 4th against China, currently ranked 17th in the world. Although not as highly ranked as Ireland, China beat higher ranked Korea at World League in London to finish in 8th position.

England are the final pool opponents, against which Ireland have had mixed results. The teams recently met at the European Championships in Amsterdam last August, where England narrowly edged the match 2-1.

Prior to that Ireland put four goals to earn an historic European bronze medal in 2015 at England’s expense.

“We are happy with our World Cup draw, it’s a competitive pool and we have played all the teams recently which is a positive,” added Fulton.

1 LeBron James among those to slam Drew Brees’ anthem comments
2 GAA players spend just 2.5 seconds within 2m of each other during play
3 How a GAA club sprang up in east Belfast over Sunday breakfast
4 Connacht continue player hunt as six academy graduates promoted
5 Conor Stakelum answers the call after skating ambitions put on ice for now
Real news has value SUBSCRIBE