‘It’s not you, it’s me': Ciara Mageean on her track to the World Indoors

Portaferry athlete has her eye on Commonwealth Games and World Championships 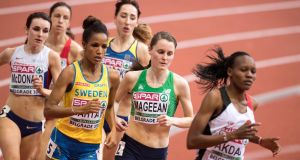 Ireland’s Ciara Mageean on her way to finishing fourth in her heat at the 2017 European Indoor Athletics Championships. Photograph: Sasa Pahic Szabo/Inpho

Marple village is just a short drive away from Manchester, via Stockport, and from there it’s only an hour on the train down to Birmingham. For any international athlete that’s effectively on your doorstep – especially in this weather.

It’s not the sole reason Ciara Mageean is running at the World Indoor Championships, now one of the few sporting events on these isles to survive Storm Emma – although it is her principal one. If these championships were any further down the tracks than Birmingham she probably wouldn’t be running at all.

Because for Mageean the two main goals for the season are a lot further away, starting with the Commonwealth Games on Australia’s Gold Coast next month, then the European Championships in Berlin in August. Indeed Birmingham is not so much a short stop away as a little stepping stone.

Birmingham really hasn’t been my focus at all, but every time I put on that Irish vest I want to represent it as best I can, give it my all

“That’s it”, she says, after a light run and some strides in Marple on Thursday morning, before taking the lunchtime train to Birmingham. “It’s just so handy, so close, and a good test to see where I am right now, without it being the sole focus. And because the Commonwealths are in April, at the end of the Australian season, we don’t have many chances to race 1,500m without doing indoors.

“Birmingham really hasn’t been my focus at all, but every time I put on that Irish vest I want to represent it as best I can, give it my all. I’d certainly like to make the final, knowing how tight indoor races can be. But I know as well I’ve quite a bit of training to do before the Commonwealths, I’m not at a peak. Still you want to walk off the track having done your best, and this is the chance for a good competitive race over 1,500m.”

It also offers Mageean the first chance to “test the legs” since joining her new training group, Team New Balance Manchester, based in nearby Marple – which has the feel of an Agatha Christie novel, right on the edge of the Peak District. That move was made last November, after a season which failed to live up to Mageean’s own high expectations: she wanted to medal at the European Indoors in Belgrade this time last year, only she dropped out; she wanted to make the final at the World Championships in London, and instead finished last in her heat.

Those expectations are always set high because Mageean has always been a high achiever, going back to her junior career, when at the 2010 World Junior Championships in Canada she won silver in the 1,500m – the only non-African medallist in the distance running events.

A chronic ankle injury then put a halt to her senior career, before under the guidance of coach Jerry Kiernan, she bounced back to win European 1,500m bronze in 2016, having set Irish indoor records over the mile and 1,500m, then improving her outdoor best to 4:01.46, second only to Sonia O’Sullivan.

She turns 26 next week and her best years are unquestionably ahead of her, but still that move to Manchester wasn’t straightforward: she still trusted Kiernan’s coaching and training group, only this was the chance to try something different, under UK distance running coach Steve Vernon, a former two-time English cross country champion.

“Home for me will always be Portaferry,” she says, “but for now Marple is where my car is parked, my suitcases unpacked. Naturally you have to weigh up everything, and it wasn’t an easy decision. Even leaving Jerry, we were very close, and it was very much a case of ‘it’s not you, it’s me’, as if we were breaking up, because it wasn’t about the coaching.

I don’t want anyone to think that I left Ireland because we didn’t have the support there.

“It wasn’t just about last season either, where I just felt tired, and weak, and couldn’t really pinpoint what was going wrong. It was more about that moment in time. I’d finished my course in UCD, there were no huge ties to Dublin. My boyfriend still lives there, my friends, my family are in Portaferry, but I had the opportunity to move and try somewhere else, and I think if I didn’t try I would always wonder what if? And chatting to Jerry we said that if it didn’t work out I could always come back.

“And it is much more of a team environment, and that’s really what drew me here. I don’t want anyone to think that I left Ireland because we didn’t have the support there. The set up at the Institute of Sport was fantastic, to be honest among the best in the world.

“What I was really missing was more of a team aspect, and living in it. I was living in Rathgar with my landlord Ollie, and my housemate Igor, who was from Croatia, and as much as I deemed myself a professional athlete, when I’m sitting here in Marple, in a house with five other athletes, and we go to the track and gym together, go warm-weather training together, dine together, that’s the team aspect I never really experienced before.

“Students who are on US scholarship might experience that, but I was in UCD and injured for a lot of that time, so never had that team aspect around me, and that’s the big thing here, to help me stay in the mindset of a professional athlete, with the belief I can be the best in the world.

“So it was really about getting that team environment to optimise my running and believe in myself. I’ve only been here a few months, and coming and going a lot, but I am enjoying it, the training group is very strong, and hopefully the next few years will show it.”

Birmingham will certainly a good test of where Mageean is now since that move: the women’s 1,500m is stacked, Friday’s three heats beginning at 7:42pm – with only the top two, plus three fastest losers, progressing to Saturday’s final. In Mageean’s third heat is defending champion Sifan Hassan from the Netherlands, plus Dawit Seyaum from Ethiopia, second two year ago in Portland.

The best ranked Irish entry in Birmingham is Phil Healy, drawn in the fifth of six 400m heats (12.38pm) – her season best of 52.08 the second fastest of the six, the first two making the semi-finals later in the evening.

Ciara Neville and Amy Foster are both out earlier on Friday in the 60m heats (10.35), with Foster’s recent Irish record of 7.27 seconds suggesting she can make the semi-final; the fifth and last Irish entry, Ben Reynolds, goes in the 60m hurdles on Saturday.

Where to watch: BBC and Eurosport have extensive coverage from Birmingham, with a live stream via the IAAF website at www.iaaf.org