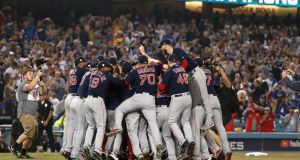 Red Sox first baseman Steve Pearce started Game 5 of the World Series the same way he and his Boston teammates finished Game 4 – by sticking a dagger in the heart of the Dodgers.

Mercifully for the battered Dodgers, there will be no more punishment. Boston used four home runs and seven spectacular innings from David Price to best Los Angeles by a score of 5-1 on Sunday night to clinch the best-of-seven series 4-1. It is the franchise’s fourth World Series since 2004 and their ninth overall.

Pearce, a midseason acquisition from Toronto, continued his offensive barrage from Saturday night by smashing a two-run home run deep into the left field bleachers off Clayton Kershaw in the first inning, and it proved to be the only offense the Red Sox would need for the rest of the night. The first baseman also forever punctuated his name in Red Sox lore by winning the World Series MVP Award. He finished the series with four hits in 12 at bats, three home runs and eight RBI.

“We are a bunch of grinders,” Pearce said after the game, “and this is exactly where we knew we were going to be.”

Boston never looked back from that damaging first inning: the Dodgers’ bats that went cold for deep stretches of the series were ineffective once again on a balmy Los Angeles evening. Indeed, the Dodgers seemed to be affected by one of the most debilitating defeats in franchise history the night before, when the Red Sox surmounted a four-run deficit with eight runs in the final three innings of Game 4.

There was some fight from the home team early on. Dodgers first baseman David Freese reduced the deficit to 2-1 in the bottom of the first inning by whacking a lead-off home run off Price. It was the 10th career postseason home run for the first baseman, who also tripled in the third inning. But it was essentially all the offense the Dodgers had in store for the night. They only managed one other hit the rest of the game.

Game 5 featured a battle between Cy Young Award-winning stalwarts who have both been battered throughout their turbulent playoff careers. Kershaw came into the game with a career record of 9-9 in the postseason with a 4.28 ERA. Price’s playoff record – 4-9, with a 4.87 ERA – wasn’t any better, but the pitcher saved his best for when it mattered most. On Sunday, he pitched seven innings and gave up just one run, and walked off the mound to a standing ovation from the Boston supporters, who attended the series in Los Angeles in droves.

“I can’t say enough about what Clayton what our guys did,” Dodgers manager Dave Roberts said. “Unfortunately we came up short again this year.”

With a potential championship clincher hanging in the balance, the patches of red in the stands were noticeable, and the Red Sox fans controlled the energy in the stadium for most of the night. In the ninth inning, and with victory in sight, they even managed a shot at their old rivals as a “Yankees Suck” chant broke out.

After allowing Pearce’s home run, Kershaw returned to the mound and recorded 15 outs without allowing a run until Mookie Betts hit a sixth-inning pitch deep into the bleachers. JD Martinez followed with a solo shot of his own the inning after.

The series lasted just five games but featured memorable moments, highlighted by the longest ever World Series game in Game 3.

The Dodgers have now suffered successive World Series defeats and watched their adversaries celebrate on their home field in back-to-back years. The franchise’s championship drought has now reached 30 years. On the other hand, “The Curse of the Bambino” that led to an 86-year championship drought in Boston is an afterthought for the Red Sox these days.