O’Donovan and O’Driscoll on top in Ireland trial 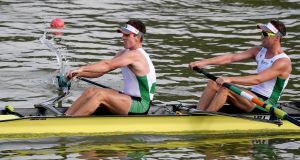 Mark O’Donovan and Shane O’Driscoll won the battle of the men’s pairs on Sunday at the Ireland trial at the National Rowing Centre. The Skibbereen men had not competed on Saturday, crying off because of an injury for O’Donovan, leaving UCD’s David O’Malley and Shane Mulvaney with a clear run. They took second on Sunday. “It is quite positive to have two former lightweight world champions close to the top,” said Ireland performance director Antonio Maurogiovanni, who said the overall standard has risen since last year.

The Skibbereen men were lightweight world champions in 2017 and the UCD men won at under-23 level this year.

Jack Dorney had two outstanding days. The Shandon man won the junior single by a big margin on Saturday and formed a winning double with Rory O’Neill of Castleconnell on Sunday. Molly Curry of Coleraine Grammar School was the top woman junior and teamed up with Castleconnell’s Lauren O’Brien to take the doubles. At Castleconnell’s own head of the river, Enniskillen’s men’s and women’s crews shone.

Farther afield, Sanita Puspure took third in the top-quality Gold Cup sculling challenge at the Head of the Schuylkill in Philadelphia, while in Switzerland, Paul O’Donovan finished a creditable fifth in the single sculls at the Armada Cup.