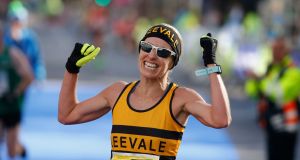 Lizzie Lee crosses the finish line in the Dublin Marathon to take third place and win the Irish national title with a time of 2:35:04. Photograph: Nick Bradshaw

Not quite a home victory, but a pretty heroic homecoming nonetheless for Lizzie Lee. After bravely running herself on to the overall medal podium she helped complete what felt like another perfect day for the Dublin Marathon.

Helped by perfectly ideal conditions, a day sent straight from the Greek gods at Marathon, Lee nailed third place after a running battle with the top two Ethiopians, her time of 2:35:03 the fastest by an Irish woman in Dublin since 2014. That also won the Cork athlete the Irish national title, inspired by the city she calls her second home having lived here for eight years during the 2000s.

The 38th edition of the event attracted another sell-out 20,000 runners and the perfect conditions no doubt spurred many others to their best of days over the classic 26.2-mile distance: Asefa Bekele from Ethiopia improved on his two successive third-place finishes to win the men’s race outright in 2:13:24, before Mesera Dubiso made it an Ethiopian double by winning the women’s race in 2:33:49 – both earning themselves a tidy €12,000 payday.

For Lee it all certainly sounded like the perfect run – the 38-year-old mother of two battling for outright victory with Dubiso and another Ethiopian Motu Gedefa, who took second, only in no way disappointed with the podium position – her coach Donie Walsh at Leevale also a former winner of the Irish national marathon back in 1972.

Whatever about the agony and ecstasy which comes at the finish of every marathon, Lee didn’t need to hide her tears. She also won €6,000 for third woman, plus €3,500 as first Irish woman, her 2:35:03 the fastest by an Irish woman in Dublin since Maria McCambridge ran 2:34:19 for second in 2014.

“All happy tears,” she said. “I’m an Irish woman, and I heard a man shouting at me in Clonskeagh, around mile 19, that I was doing the Irish proud. I kept saying to myself I have to get on to the podium, I just have to get on to the podium. I really wasn’t happy with my run at the European Championships in Berlin in August, and said to Donie at the finish I really wanted to come to Dublin and win the national title. I needed redemption after Berlin, but the forecast here suited me, the cool day.

“And I had a dream race, I just couldn’t keep with the two Ethiopians when they picked it up in the last two miles. But to get an Irish woman on the overall podium, I’m pinching myself, thrilled with that.

Indeed Lee ran her own pace: “I went through 10 miles, and the leaders were really close, and once I caught them I just sat in. I just went for it on the slipway off UCD, knew that from winning the mini marathon, and I just hammered to the next mile.

“I’m a mother of two small girls, I work full time, and running is my hobby. And I’m on the podium with two Ethiopian women. And for Donie, and Jim Aughney, the Dublin race director, who has been there from the beginning for me, the support he gives us. And Dick Hooper was out there as well passing me bottles at the water stations. And everything second step I was getting a shout for ‘Lizzie’ or for ‘Leevale’, and I know the other girls could hear that too.”

Lee ran the Olympic marathon in Rio two years ago, plus that European Championship marathon in Berlin just two months ago – the home crowd out around the 26.2 miles worth seconds if not minutes on the day. She’s made no secret of her belief that her best marathon running days are still to come, and this added proof. With her husband Paul, Lee’s first daughter Lucy was born in late 2014, and she came back in late 2015 to run her fastest marathon (2:35:51 in Berlin), qualifying her for Rio (where she finished 57th); her second daughter Alison was born 16 months ago; she’s also a full-time employee of Apple and that hasn’t slowed her down either.

“And I felt amazing, coming down Foster’s Avenue, and I lived in Dublin for eight years, so I knew every metre of those last few miles, and I just thought ‘let’s be having you’.”