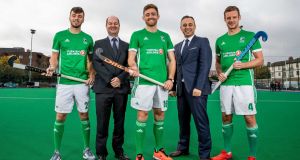 Alexander Cox’s first matches on the sidelines for the Irish men’s team are set to be a serious test of resolve for many of his panel as the World Cup preparation begins in earnest.

They face England on Monday afternoon at 4.30pm (CET) in Valencia in the first of five games in seven days with Spain and the Netherlands also involved in this four nations tournament.

With the European club leagues coming to a staggered close for their winter stop, players have been arriving on the Spanish coast in dribs and drabs.

Indeed, for the likes of Paul Gleghorne, Michael Robson and Matthew Bell both had double weekends in Germany with Krefeld. Five of the panel, meanwhile, were in Belgian league action meaning they were delayed joining up with the squad.

As such, Cox says it is” the most challenging” part of Ireland’s preparation for the World Cup which gets under way in late November in India.

“For those guys, it’s really important they take their rest between the sessions and the games. Hopefully they don’t get injured and are fit enough to play.

“Our lead-up for this week is not ideal compared to the Dutch team who have had a full week together, train together, fly together, rest and then play us.

“So our first real test is one for our mentality and our physical side. Of course you want to get a result but I really see it as a practice game. It will be tough because we will not be on top of our game physically.”

Nonetheless, it is a great series of matches for the squad to get up to game tempo, facing three sides ranked in the top ten at a vital time.

Ireland face Spain on Tuesday and the Netherlands on Thursday before a couple of crossover games next weekend.