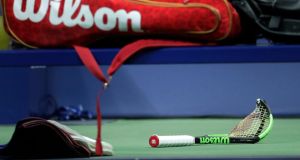 Serena Williams’ broken racket after she slammed it on the court during the US Open final against Naomi Osaka of Japan. Photograph: AP Photo/Julio Cortez

Serena Williams was penalised a game in her US Open final defeat by Naomi Osaka after a number of run-ins with umpire Carlos Ramos. Initially unhappy about being penalised for coaching from the stands, Williams was then given a point penalty for smashing her racket, before Ramos took a game away from her after she called him a “thief”.

It is not the first time Williams has been involved in a controversial moment.

Serena was due to face sister Venus in the finals of the major WTA Tour event held close to their childhood home in California. Fans were unhappy that Venus withdrew just before the match, and booed Serena during the final against Kim Clijsters, which she won.

Venus and father Richard, sitting in the stands, claimed they were racially abused. Serena did not play at the tournament again until 2015, while Venus returned in 2016.

During her quarter-final against Jennifer Capriati, several line calls went against Williams, including an incorrect over-rule by umpire Mariana Alves. Williams argued with Alves, who did not officiate for the rest of the tournament.

It was the first of Williams’ run-ins with authority at Flushing Meadows, and she admitted her mind flashed back on Saturday, saying: “I think it’s just instantly, like, ‘oh, gosh, I don’t want to go back to 2004’. So it’s always something.”

Having been given a racket abuse warning after losing the first set of her semi-final against Clijsters, Williams was called for a foot fault on a second serve trailing 5-6 and 15-30 in the second set, thus giving her opponent a match point.

Williams reacted angrily towards the line judge who had made the call, swearing and threatening to shove a tennis ball down her throat. She received a point penalty and therefore lost the match. She was fined a record $82,500 and put on a two-year probation.

Williams reached the final at Flushing Meadows and took on Australia’s Sam Stosur. Facing break point, Williams shouted “come on” after hitting a forehand that Stosur attempted to return. Umpire Eva Asderaki ruled that a hindrance and awarded the point to Stosur. Williams was furious and harangued Asderaki, called the umpire “a hater” and saying she was “unattractive inside”. The American was fined only $2,000 dollars after it was deemed her outburst was not a major offence under the Grand Slam code of conduct.

3 Leo Cullen: ‘a good chunk of the guys who are injured will be back’

Leo Cullen: ‘a good chunk of the guys who are injured will be back’ 06:15
Rachael Blackmore’s Grand National victory resonates around the world 06:00
Louis and Robinson may have died broke but their legacy is timeless 06:00
Potential of Parsons and Wall put French and English on notice 06:00
Ken Early: It’s time for Alexander-Arnold to move to the middle 06:00