Paul and Gary O’Donovan show their class in Bulgaria 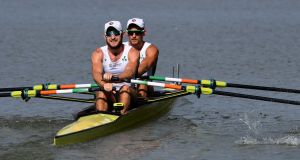 Paul and Gary O’Donovan produced a classy performance to win their heat and qualify for the quarter-finals of the lightweight double sculls at the World Rowing Championships in Plovdiv in Bulgaria. The high standard of competition on the first day on fast water was noteworthy, and only two of the five Ireland crews which competed qualified directly.

The O’Donovans looked bang on form. Germany’s new combination of Jonathan Rommelmann and Konstantin Steinhuebel pulled at the beards of the Irish, leading all the way to the 1,500 metre mark. But by then they were already doomed: in this form the O’Donovans are metronomic. Each quarter was fast: one minute 33.52; 1:34.04, 1:34.68, 1:33.55.

What it looked like on the water was an overlap with the Germans at 1500 metres and a race away from them from there. Both crews, along with Portugal and Argentina went through to the quarter-finals. Norway, Canada, Italy and Poland won the other heats, with Italy marginally faster than Ireland. There are quarter-finals and semi-finals to come, but all five could figure come Saturday’s final, with Belgium a good bet to join them.

There were two more impressive performances by Ireland crews. The pair of Aifric Keogh (26) and Emily Hegarty (20) had to finish in the top three in a tricky heat to qualify for the semi-finals.

Victory went to New Zealand’s Grace Prendergast and Kerri Gowler, the reigning world champions and holders of the record time for the event. Behind them, the United States, Australia and Ireland fought it out. At 1,500 metres the US and Ireland were level – but Hegarty and Keogh took over from there to take a clear second place.

The new Ireland men’s double of Ronan Byrne (20) and Philip Doyle (25) also took second in their heat, again behind a dominant New Zealand crew. John Storey and Chris Harris set a fierce pace – this was by far the fastest heat – and secured the one qualification spot for the semi-finals. Doyle and Byrne broke from the pack to take the next spot. It was a promising performance as they head into the repechages.

Not so happy to be in the repechages are Mark O’Donovan and Shane O’Driscoll. The world champions in the lightweight pair have set out to prove themselves as a credible heavyweight unit.

At this event, the first task was to finish in the top four of five in their heat, booking an automatic place in the quarter-finals. With 500 metres to go, they held fourth, but Belarus produced a faster final quarter and pushed Ireland into last place. Today’s repechage (10.25 Irish time) gives the Skibbereen men a quick chance to redress the balance.

The lightweight women’s double of Denise Walsh and Aoife Casey must also find their way through the backdoor of the repechage. The top two in their heat vaulted into the semi-finals, but the top two were New Zealand and Australia. Canada finished .34 of a second off third. Walsh and Casey took fourth.

Today, Sanita Puspure will book her place in the semi-finals of the single sculls if she wins a heat (9.29 Irish time) which also features Fie-Udby Erichsen of Denmark, the Olympic silver medallist in 2012. The Ireland women’s double (9.13) and men’s lightweight quadruple (8.26) also begin their campaigns.

As Ireland lightweight coach Dominic Casey said yesterday: “It will be an interesting week.”

Back in Ireland, Patrick Boomer won the single sculls event at the Irish Offshore Championships at O’Carroll’s Cove in Kerry. The Ireland international hopes to go on to represent his club, Loughros Point, at the World Coastal Championships in Canada in October.