Williams burns the house down as Osaka is forgotten

Serena Williams has accused an umpire of sexism and treating her more harshly than men after an on-court tirade at the official during her United States Open final defeat to Japan's Naomi Osaka. Video: USTA/ESPN/TSN 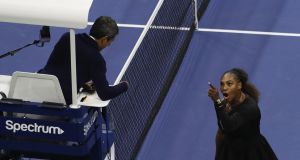 Serena Williams argues with umpire Carlos Ramos during her defeat to Naomi Osaka in the women’s singles finals at the US Open. Photograph: Jaime Lawson/Getty Images

The venerable boxing trainer Cus D’Amato used to say that emotion, particularly fear, is like fire. If you make it work for you, then it can cook your food, keep you warm and give you light in the dark. But if you let it go out of control, it can burn your house down.

Only Serena Williams herself knows whether her shocking meltdown at the end of the most controversial US Open final ever staged – in which she was beaten by the brilliant 20-year-old Naomi Osaka – was down to a surrender to emotion or, as she framed it in the chaotic aftermath, an impassioned stand against sexism.

But what, to one of the sport’s fiercest and most unsparing competitors, could be scarier than being outplayed by a young lion who appeared more athletic, who was serving faster and returning everything fired her direction with metronomic consistency? What could be more unsettling for Williams, who turns 37 this month, than watching another opportunity to tie Margaret Court’s record for grand slam titles slipping from her grasp when there’s no telling how many more chances lie ahead?

Williams simply didn’t have answers on Saturday afternoon for the demands put forth by Osaka. At once the feelgood vibe of Serena’s much-publicised comeback following the birth of her daughter, celebrated in lucrative ad campaigns and a glossy five-part documentary series, felt like it was crashing down around her. It’s one thing to have the end of your career in sight, but perhaps Williams felt like her time was passing right in that moment.

Then one harsh call and boom.

The regrettable denouement of Saturday’s match is a Rorschach test for tennis fans: some think Williams was the victim of a gross injustice from an overzealous umpire while others believe her response was conduct unbecoming of a professional.

The one thing everyone can agree on is that officials intruding in this way is unwanted, even if chair umpire Carlos Ramos was correct under the rules in all three code violations that prompted Williams’ outburst: the first a warning for illegal coaching, the second a point penalty for racquet abuse, the third a game penalty for verbal abuse. What’s most unfortunate is that Williams either couldn’t or wouldn’t let it go. And not just for herself: it means that we are now talking about Williams rather than just how brilliant Osaka was in victory.

If you’ve watched Osaka for any length of time over the last year or two, but especially over the last fortnight in Flushing Meadows, you knew that Saturday’s match had the chance to be special. The pressure on Williams as the favourite meant Osaka was playing with house money and could swing freely. Had she been beaten, there would have been no shame in losing to the greatest player of all time playing before a partisan crowd.

The only question was whether a 20-year-old playing in her first grand-slam final could hold her nerve. It wasn’t long before it was obvious she could. Even after Osaka broke Williams in her second and third service games and cruised to the opening set, it was inevitable the American would make her trademark surge. It was far less clear whether it would be enough.

The genius of Williams’s late-career renaissance is her knack to shift her level seemingly at will. If the serve is betraying her or a few loose points cost her an opening set, she’s proven time and again capable of elevating her game: flattening her groundstrokes, putting more on her serve.

But against Osaka it wasn’t clear if third gear would be enough – or if fourth is even there anymore. Maybe that’s where the fear creeps in. And maybe that’s where you look for a way out, not unlike her infamous loss to Kim Clijsters in the 2009 US Open where Williams was called for a foot fault serving at 4-6, 5-6. Her reaction, to threaten the lineswoman while on a code violation, expedited a finish that had taken on a sense of the inevitable: the tennis equivalent of Mike Tyson biting Evander Holyfield’s ear.

Now a rule is a rule whatever the score is, but Ramos’s call in context was dubious. On Saturday, Ramos might not have been wrong, but that doesn’t make it right.

It can’t be said enough that we are lucky to be living in Williams’ time. The story of an African American woman from Compton teaming with her older sister to rewrite the record book of a sport predominantly owned, played and watched by affluent white people is the ultimate American folk tale – and it’s still being written in real time. Slights rooted in sexism or racism are for Williams not paranoid delusions but everyday realities. To hear a stadium of more than 20,000 spectators rain boos and jeers on the court surely evoked harrowing memories of Indian Wells in 2001. She is a superhero, but every superhero has their weakness – and Serena’s is the red mist.

You can acknowledge the twin burdens of racism and sexism that Williams has shouldered and still admit she could have handled Saturday’s final stages better. Her comments on court, during the trophy ceremony and in her post-match interview demonstrated her uncanny habit of conflating the good with the bad, mixing everything up to excuse her poor behaviour. Consider her response to a reporter who asked if she would have done anything differently.

“[Ramos] has never taken a game from a man because they said ‘thief’. For me it blows my mind. But I’m going to continue to fight for women and to fight for us to have equal – like Cornet should be able to take off her shirt without getting a fine. This is outrageous,” she said.

This sort of self-exoneration through obfuscation undercuts the massive strides made by Williams over most of the last decade in sportsmanship, which for years was the only criticism you could lob toward an otherwise unassailable character.

Williams, who like all true icons is many things to many people, can still tie Court’s record in four months at the Australian Open, a tournament she’s won seven times, including last year while eight weeks pregnant. She will be duly celebrated if it happens, but there’s no question Saturday’s regrettable episode will be long remembered as the night Williams’ house went up in flames.