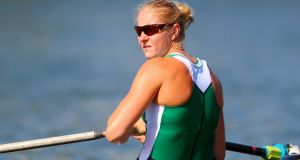 Ireland compete at the European Rowing Championships in Lucerne this weekend with a strong hope of at least one medal in a major event.

Puspure takes on Vicky Thornley in Friday’s heats. Fatigue forced the Briton, an Olympic silver medallist in the double, out last season.

The 22-year-old Skibbereen twins, Jake and Fintan McCarthy, are able backups in the lightweight double for the world champions. Ireland trials are coming up and the McCarthys do not see themselves as long-term bit players.

The women’s lightweight double of Lydia Heaphy and Denise Walsh are a debutant crew at this level. Their heat sees them take on a top Swiss crew – Frederique Rol and Patricia Mertz.

The Ireland men’s double of Ronan Byrne and Philip Doyle performed superbly at last year’s World Championships to take ninth. They may be worth watching in Lucerne: an A Final place (top six) would be an achievement in this tough event.

The illness suffered by Aifric Keogh forced the withdrawal of the pair of Keogh and Monika Dukarska.

Ireland juniors had another outstanding weekend, this time shining at the National Schools Regatta in Britain. Molly Curry broke the championship record in her win in the Championship Single.

Junior girls also took some of the top prizes at Metropolitan Regatta, outshining some adult rowers. This weekend’s Carlow Regatta, which covers two days and is one of the most successful events in giving young rowers good competition, is historic. For the first time, there are more girls than boys entered.

The selection of the senior team for the Home International regatta in July will be based primarily on racing at Cork Regatta on June 22nd and 23rd.