Naomi Osaka remains on a roll with win over Victoria Azarenka 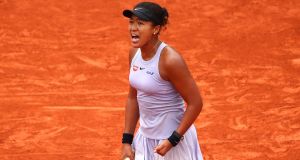 Naomi Osaka is into the third round at Roland Garros after victory over Victoria Azarenka. Photograph: Clive Brunskill/Getty

World number one Naomi Osaka survived another major scare to reach the third round of the French Open.

The 21-year-old, who is chasing a third consecutive grand slam title, lost the first set 6-0 against Anna Karolina Schmiedlova on Tuesday and was two points from defeat.

Things did not get quite so hairy against former world number one Victoria Azarenka in a high-quality match but the top seed was a set and a break down before recovering to win 4-6 7-5 6-1.

Osaka, who said she had never been more nervous during a match than against Schmiedlova, again made a poor start, with Azarenka winning the first four games.

Two-time Australian Open champion Azarenka has been getting closer to her best form having finally returned full-time to the tour last spring following a bruising custody battle over her toddler son.

She weathered an Osaka fightback to take the opening set, the pair trading ferocious ground strokes, and then opened up a 4-2 lead in the second.

But Osaka has established a reputation as one of the toughest players mentally and she dug her way back into the match before racing out to a 5-1 lead in the decider.

Azarenka put up more resistance at the end but ultimately Osaka was just too strong.

1 IRFU in line for €75m windfall as CVC acquire 14.5% Six Nations stake
2 Monica Seles: The warrior queen who could have been the best ever
3 Matt Williams: Six Nations must recognise the desire for revolution outside Europe
4 Michael Walker: Ian Baraclough staying on trend, from Sligo to Windsor Park
5 Bryson DeChambeau motors home with 65 to win in Detroit
Real news has value SUBSCRIBE