Federer to face a blast from the past against Casper Ruud 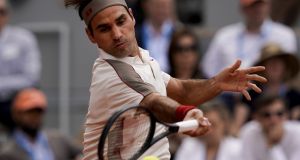 Roger Federer does not need any reminders about his advancing years but he will get one anyway when he faces Casper Ruud in the third round of the French Open.

The 20-year-old Norwegian is the son of former professional Christian Ruud, who was in the draw when Federer made his grand slam debut at Roland Garros 20 years ago.

“I know probably more about his dad than about him,” Federer said of Casper, who claimed an impressive 6-4 7-5 6-3 victory over 29th seed Matteo Berrettini to reach the third round of a grand slam for the first time.

“I know that he’s improved a lot in recent years, and I think he plays very well on the clay. But for any 20-year-old to be on the big stage, playing a top guy, on a centre court, that’s what you dream of.”

Casper is coached by Christian, who will be supporting him from the stands on Friday.

“I think they practised together once, he told me, but he never played him,” said Casper. “So I will be the first Ruud to say that I was able to play him.”

Federer is yet to drop a set on his return to the Parisian clay but he was given a slightly tougher test than had been anticipated by big-serving German lucky loser Oscar Otte before coming through 6-4 6-3 6-4.

The 37-year-old is happy with how things are going, saying: “I feel really good considering I haven’t played here in that long. Especially if I think back a few weeks and months ago, I didn’t know how successful I was going to play or how I was going to feel on the clay.

“I hope I can keep it up. Next round is definitely going to be tougher, I believe. I’m very happy. We’ll see how far it’s going to take me. So far, so good.”

It was the second successive match in which Nadal had faced a German qualifier with the same first name having defeated Yannick Hanfmann in the opening round.

Maden detained Nadal for a few minutes and one game longer, with the 11-time champion making somewhat heavy weather of the third set, where his serve was broken twice.

“It was a good match for the first two sets,” said Nadal. “Not unbelievable, but 6-1 6-2 with positive feelings.

“Then in the third, being honest, I think I lost a little bit of concentration and intensity. And then all the match became difficult. The positive thing is every time that I had the mistake, then I had the break again, and that’s the good news.”

The pair have met three previous times on clay, with Goffin not managing to win a set, although the Belgian did beat Nadal at the ATP World Tour Finals two years ago.

“It is probably the ultimate challenge,” said Goffin, who has slipped from a high of seven in the rankings 18 months ago.

Sixth seed Stefanos Tsitsipas was given a stern examination by Bolivian Hugo Dellien before coming through 4-6 6-0 6-3 7-5.

Tsitsipas was a break down in the fourth set but recovered to claim victory on his fourth match point after two hours and 49 minutes to reach the third round for the first time.

Former champion Stan Wawrinka is a player none of the top seeds will want to meet and he showed he means business here by crushing in-form Chilean Cristian Garin 6-1 6-4 6-0, while seventh seed Kei Nishikori beat home favourite Jo-Wilfried Tsonga 4-6 6-4 6-4 6-4.