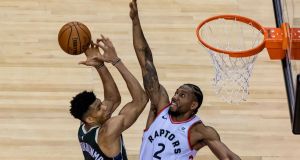 Can anybody stop the Golden State Warriors? That is the question ahead of the first game of the 2019 NBA Finals (Friday, 2am on Sky Sports Arena) as the Toronto Raptors become the latest team to take on the mantle.

The Warriors have been so dominant in the NBA that they have only been brought to the final game of a seven-game playoff series once in the past three seasons (against the Houston Rockets in the Western Conference final last year). This year has been a similar story - a 4-2 win over Los Angeles Clippers was followed by a 4-2 victory over Houston Rockets and a dominant 4-0 win over Portland Trail Blazers.

Against the Trail Blazers, the Warriors won easily even without Kevin Durant, one of the league’s biggest stars. Durant controversially joined the Warriors from Oklahoma City Thunder in 2016 when they were already the league’s dominant team and has been accused of jumping on the bandwagon in order to get his Championship ring, in turn ruining the competitive nature of the NBA.

Over the past two years that has proven to be the case, with Durant joining regular All-Stars Steph Curry, Klay Thompson and Draymond Green en route to winning back-to-back NBA titles. As time has progressed, the Warriors have become increasingly reliant on Durant, a 6 foot 9 small forward with a 7 foot 4 wingspan and the grace and finesse of a point guard.

So it was interesting when the Warriors went back to their roots against the Trail Blazers, winning all four matches with Curry, Thompson and Green taking charge. The original “Splash Bros”, Thompson and Curry have been at the Warriors since the beginning and changed the dynamic of NBA basketball with their incredible three-point shooting. As Curry lit up to score more than 36 points in each game against Trail Blazers, it seemed like he was being inhibited by Durant and had been forced into a subsidiary role.

The fact that Durant is not scheduled to return to the Warriors until Game 3 of the series against the Raptors means all will be laid bare about how much the Warriors need Durant. And with constant rumours about a possible transfer to New York Knicks, it may answer a lot of questions about the Warriors future as the contenders look to knock them off their perch.

Their opponents in the finals have taken a more scenic route and there is a little bit more romance about them. The Toronto Raptors are looking to become the first Canadian team to ever win the NBA title and have reached the finals after so many twists and turns, taking part in some of the best games of the season.

The most notable was the final game of the Eastern Conference semi-finals against Philadelphia 76ers. With the game heading for overtime, Kawhi Leonard took the fate of the team in his hands, somehow scoring an off-balance shot from the corner with 0.4 seconds left, with Joel Embiid, one of the best defensive players in the league, guarding. The ball bobbled along the ring for what seemed like an age before falling into the ring. When the ball dropped the home crowd exploded in one of the most memorable sporting moments of the year so far.

In the next round, the Raptors backed up their performance against many people’s favourite to make the NBA Finals, the Milwaukee Bucks. The Raptors lost the first two games against the Bucks, with the league’s best player in the regular season Giannis Antetokounmpo in imperious form.

But the Raptors responded with four straight wins as Leonard managed to stop the “Greek Freak”, a master of post-moves, defensively as well as top scoring in three of the four wins. Leonard’s leadership on both ends of the court is the most similar of any current player to Michael Jordan, a player excellent at defending but also able to score anything from a slam dunk to a long 3-pointer when it matters.

It would be unfair to call the Raptors a one-man team and they have impressive strength in depth with Kyle Lowry’s creativity, Marc Gasol and Serge Ibaka’s defence and Pascal Siakam and Fred VanVleet’s finishing. The Raptors have been a great regular season team in recent seasons, but haven’t sniffed the finals once they have gotten to the Playoffs. It is the arrival of Leonard last year that has elevated them to this level and gives the Raptors, and the league, hope that the Warriors might finally be beaten.