Pegasus and Cork Harlequins go top as UCD are held 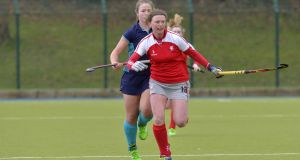 Alex Speers of Pegasus. She was one of three scorers in the first half against Loreto. Photograph: Rowland White/Inpho

Goal sprees from Pegasus and Cork Harlequins, who scored 11 between them over the weekend, lifted both sides to the top of the Hockey League table, while leaders UCD slipping to third after being held to a scoreless draw by Pembroke Wanderers.

Pegasus had a surprisingly comfortable 6-0 victory at Queens on Sunday over a previously unbeaten Loreto side. There were three first-half goals from Lucy McKee, Alex Speers and Taite Doherty, followed by another three in the final quarter from Michelle Harvey, Hannah Grieve and Rachael McMillan.

Cork Harlequins also had an emphatic win over Leinster opposition, a Naomi Carroll hat-trick helping them on their way to a 5-0 lead over Trinity on Saturday before Sally Campbell got a late consolation score for the hosts.

Pembroke’s Iseult Cambay was the source of much of UCD’s frustrations at Serpentine Avenue on Sunday, the young goalkeeper repeatedly thwarting the students with a string of saves, but it was Pembroke who almost nicked the winner right at the death when Erika Hinkson’s shot was deflected just wide.

Ards, meanwhile, suffered their first defeat of the season at the hands of Belfast Harlequins, Jenny MacAuley and Lucy Geddes getting their goals in a 2-1 win.

Railway Union picked up their first victory after three draws, Kate Lloyd helping herself to a hat-trick in a 6-0 hammering of Monkstown.