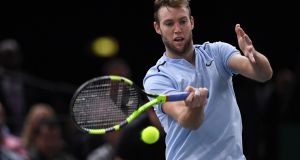 The US’s Jack Sock returns the ball to Serbia’s Filip Krajinovic during the final of the Masters 1000 indoor tennis tournament in Paris. Photograph: Christophe Archambault/AFP/Getty Images

The world number 22 came from behind to win 5-7 6-4 6-1 against Serbian qualifier Krajinovic to seal a spot in the end-of-season ATP Tour Finals.

Sock is the first American to lift a singles trophy at the ATP World Tour Masters 1000 level since Andy Roddick in Miami in 2010.

“There have been a lot of firsts,” Sock said in quotes on the ATP Tour’s official website. “It started at the French Open with my first fourth round of a Slam, now I’ve won my first Masters 1000 in Paris.

“This will be my first time in the top 10 and this will be the first time making the year-end Finals. So there’s a lot going on right now emotionally and I can’t wait to enjoy it all with my team.”

The 25-year-old, who beat Great Britain’s Kyle Edmund in the second round despite trailing 5-1 in the final set, was broken twice in the first set as Krajinovic went ahead.

But Sock hit back to take the second set 6-4 after breaking Krajinovic in the first and fifth games.

He then won six straight games in the final set – after Krajinovic had won the first – to take the title.