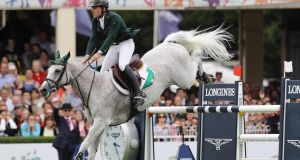 Mark McAuley on Miebello in August at the RDS. Photograph: Inpho

Riding Eva Lunden’s 13-year-old Swedish Warmblood gelding Miebello, the Irish rider was one of 13 who progressed to the jump-off round of this 1.60m class where 10 competitors once again left the ring without faults.

Eighth to go in the second round, McAuley bagged the €25,000 first prize when stopping the clock on 34.38 with Switzerland’s Steve Guerdat claiming the runner-up slot on Bianca (34.77). Penelope Leprevost of France slotted into third with the stallion Vagabond de la Pomme (34.97). Geneva-based McAuley (30) is engaged to Sweden’s Charlotte Mordasini, Miebello’s former rider.

Kyle and McCloskey’s responsibilities in their disciplines will include stewarding at international events within Ireland, acting as the contact person between the National Federation (NF) and the FEI honorary steward general and advising the NF on all matters relating to their responsibility. They will also inform the organising committees of international events in Ireland of their responsibilities relating to stewarding and stable security under their jurisdiction.

Speaking about her appointment, Kyle said: “I am delighted to be given the opportunity to represent Ireland as FEI eventing steward general. The plan will be to develop the number of FEI stewards from our numbers and ensure their continued development and education for the good of our sport.”

Of his appointment, McCloskey commented: “I am very honoured to be appointed as the FEI jumping steward general for Ireland. I am very much looking forward to working with the FEI and IRL stewards in the future both at home and abroad.”

Forde has been reappointed FEI national head veterinarian (IRL) for another term. His role is to maintain effective communication with the FEI veterinary department on veterinary-related matters within their country.

Speaking after his reappointment, Forde said: “I’m honoured to be reappointed as FEI national head veterinarian for Ireland. There are many challenges ahead, not least the advent of Brexit and its potential effect on the international movement of horses. There have also been massive changes in the rules and regulations of the FEI. These need to be addressed with care and attention.”