Anglers asked to acquaint themselves with new fishery bye-laws 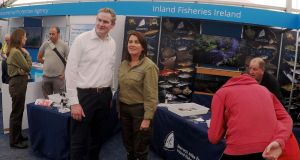 Three new angling bye-laws have been introduced by the Minister of State for Inland Fisheries, Sean Kyne, in the Eastern River Basin District to take effect from Sunday, October 1st.

On Lough Muckno “Conservation of Coarse Fish and Pike Dundalk District (Lough Muckno) Bye-law No. 950, 2017” provides for catch and release for coarse fish and pike.

Anglers must use keepnets to hold fish and all are to be subsequently released.

This also applies to Gas Lake and the waters up to Derrygreevy Bridge, tributary up to Frankfort Bridge, County Water up to Wallace’s Bridge and the Clarebane River up to Clarebane Bridge.

On the River Vartry, the “River Vartry System (Conservation Bag Limit), Bye-law No. 952, 2017” has been introduced. An angler is now permitted to take one sea trout (40cm or less) per day during the open season (March 1st-September 30th). The river is closed for salmon and sea trout over 40cms.

Anglers are requested to familiarise themselves with details of the new bye-laws at fisheriesireland.ie.

Study on trout genetics
Findings of a three-year research study into the genetic make-up of Ireland’s brown trout and sea trout populations were presented recently at a one-day conference in the Hodson Bay Hotel, Athlone, Co Westmeath.

The main areas in the study included selected Dublin Rivers; Moy catchment; Shannon system (Derg, Ree and Sheelin), Corrib and Ramor. The key finding was that a high level of genetic diversity is evident from all catchments.

For example, there are 27 genetic groupings of brown trout in the Moy catchment; 17 in the Liffey; 34 in Ree and 40 in the Derg catchment. Tributaries keep Conn well stocked, in particular the Rivers Addergoole and Deel system (together they contribute 77 per cent to adult stocks).

Key contributors of brown trout to Ree are the Rivers Inny and Camlin with over 80 per cent. However, barriers and poor water quality were found to be significant factors in unravelling genetic diversity patterns.

The study also highlighted how successful “citizen science” can be working with angling communities from across all three main project areas. This feature was critical to the success of the project.

Dr Cathal Gallagher, IFI’s Director of Research and Development, said: “The findings of the study will be of interest to anglers, conservationists, fishery managers and the wider public. More crucially, it will have real practical applications and will assist IFI in making the most cost-effective fisheries management and conservation decisions.”

New loughs website
Northern Ireland’s Loughs Agency has re-launched its website ufishireland.org with more information for local and visiting anglers. The new-look site covers a raft of details to equip anglers with the most up-to-date information for fishing in the Foyle and Carlingford catchments.

Interactive maps of rivers show club boundaries and details are provided for those loughs open to the public and contact details relating to stocked lakes.

The site also includes information for coarse venues and shore marks, and lists tide tables, lunar phases, sunrise/sunset times and weather forecasts. (More real-time data will be available in the near future for river levels, water temperatures, turbidity and rainfall.)

If you wish to include additional information to uFish Ireland, please contact ufish@loughs-agency.org or David Spencer on 028-7134 2100.