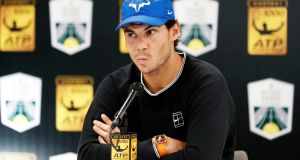 Spain’s Rafael Nadal may miss the ATP Finals in London due to his knee problems. Photograph: Ian Langsdon/EPA

Rafael Nadal’s participation at the ATP Finals in London could be in doubt after he pulled out of the Paris Masters with knee problems.

The world number one had his right knee strapped during his third-round win over Pablo Cuevas on Thursday and struggled with his movement.

Nadal played down the issue after the match but withdrew ahead of his scheduled quarter-final against Filip Krajinovic.

In a press conference shown on Sky Sports, Nadal said: “The pain during the match was too much but it was not the moment to stop.

“I don’t like to stop during the match, even if I’ve had to do it a couple of times in my life. Especially winning the match, thinking I have some hours in between to do some treatment.

After wrist problems badly affected his 2016 season, Nadal had stayed fit throughout a remarkably successful 2017 campaign, winning two grand slam titles and returning to the top of the rankings.

But knee problems, which have dogged his career, resurfaced in Shanghai last month, causing him to miss last week’s tournament in Basel.

Nadal had hoped rest would fix the issue and there must now be serious questions over whether he will risk exacerbating the problem by playing in the ATP Finals at the O2 Arena.

The tournament – which like Paris is staged on Nadal’s least favourite surface, indoor hard courts – begins on November 12th, giving him little over a week to recover.

Forced to miss the tournament

Nadal did not want to speculate about his prospects, saying: “I cannot talk about London now. I am sad enough to pull out from here. The only thing I can say is I’m going to do my treatment, I’m going to try my best to be playing in London.”

Nadal has been forced to miss the tournament, the biggest title to elude him during his career, on five previous occasions because of injury.

Juan Martin del Potro’s surge towards the ATP Finals fell agonisingly short when he was beaten in the Paris quarter-finals by John Isner.

Victory for Del Potro, who was well out of the race before reaching the US Open semi-finals, would have assured him of one of the eight spots in London.

The popular Argentinian made his most recent appearance at the O2 Arena in 2013 before serious wrist problems nearly ended his career.

He made a concerted push to try to qualify following his heroics in New York, reaching the semi-finals of the Masters event in Shanghai, winning in Stockholm and then losing narrowly to Roger Federer in the final in Basel last weekend.

Isner’s victory kept alive his own chances, which had appeared very slim at the start of the tournament. Winning the title would see him overtake Pablo Carreno Busta, who currently sits in the final qualifying spot.