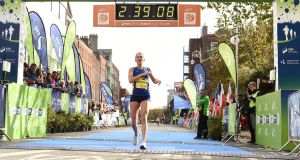 Laura Graham of Mourne Runners, Co Down, crosses the line at Merrion Square in Dublin city to be the first Irish finisher in the women’s category of the Dublin Marathon. Photograph: Sam Barnes/Sportsfile

Einstein didn’t exactly have marathon running in mind when he propounded the notion that as speed increases, time slows down, but it appears to be working just nicely for Laura Graham.

Graham’s marathon speed is certainly increasing and with that it seems time is slowing down, or at least her body clock: at age 31, and already the mother of four young children, she’s still relatively new to marathon running and yet clearly getting faster with age, improving her Dublin marathon time by almost three minutes to defend her Irish women’s title won for the first time last year.

In clocking 2:39:06 Graham was good enough for fourth overall on the day, Nataliya Lehonkova of Ukraine dominating from gun to tape to take outright victory in 2:28:57; Ashu Kasim of Ethiopia took second in 2:34:35, Viktoriya Khapilina also of Ukraine third in 2:35:54.

Then came the calm- and composed-looking Graham, who like last year ran a sweetly paced race and afterwards humbly admitted to being brought close to tears such was the support out on the course. She did have to battle to get past 2012 Olympian Caitriona Jennings, second best Irish finisher in 2:42:36, in the closing miles, who briefly went ahead of her, the gap in the end over three minutes.

“I felt this year was a bit tougher, a bit windy, and with a bit more pressure too,” said Graham, who also works part-time at the local leisure centre at Kilkeel, in south Co Down.

“But at the same time I think I enjoyed it a bit more, even though it felt that bit tougher. And the crowds were unreal. At one point I nearly started crying, so many people were shouting and roaring for me. Thanks to them all.

“I had a bit of a bug during the week, and the kids still have it, but I came up today thinking whatever I’m doing, I’m crossing that line.”

What makes her achievement all the more remarkable is the fact it’s her fourth marathon this year, and comes just five weeks after she ran Berlin in a lifetimes best of 2:37.05.

“I just enjoy them, really. I wanted to run Berlin this year, but couldn’t let Dublin down either, but the Marathon Mission has always supported me, and Jim Aughney the race director here, has been fantastic. So I really wanted to give it another go.

“And I still just try to go out and beat myself, be the best I can be. I like company, too. Because training can be lonely. At least when you’re running marathons you’re with people, and my husband often comes out with me on the bike.”

Waiting for her at the finish were her children, Payten (seven), Jaydon (six), Layla (five) and Darcy (three), along with her husband Thomas: her 2:39:06 is just short of the qualifying standard for next year’s European Championships in Berlin.

Earlier this year, eight days after running the London Marathon in 2:42:38, Graham won the Belfast Marathon in 2:41:45, the first outright Irish women’s winner since 1999. She started running “by complete accident”, running the Belfast Marathon seven years ago to help raise funds for a heart charity after her father Drew survived a heart attack. She’s now coached by Ryan Maxwell of Mourne Runners AC.

Sunday’s race – which attracted another record entry of 20,000 – also saw Patrick Monahan defend his wheelchair title for a fourth year in a row, his 1:49.55 all the more impressive given he was unable to train for the last five weeks with a shoulder injury.