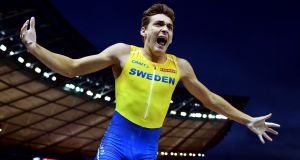 Most athletes will tell you that after every championships there is a slow and then sudden comedown, and with that the realisation of the need for a new focus and fresh challenge.

Even those of us watching from inside the TV studios are left with a bit of a void. For me, the focus was on the European Athletics Championships in Berlin, via the RTÉ studios in Donnybrook, with a casting eye over some of the events happening at the same time in Glasgow.

Part of the comedown is getting back into some old or familiar routine. On the Monday before Berlin, I took the scenic route from Cobh to Dublin via Killarney, as my local cycling club DeRonde van Cork – or the Blue Train, as I like to call them – had scheduled a bank holiday special through the inner ring of Kerry. After a week of sitting in the studio it’s time for a new challenge.

For the large number of Irish athletes competing across a range of different events, the past week or so was their chance to shine. The new combined European Championships concept included seven different sports, beginning with swimming, cycling, golf, gymnastics, rowing and triathlon, and then the athletics. It felt like a sort of mini-Olympics, wall-to-wall sports for 10 days, all broadcast across our screens, although in some ways it all only really came to life when the track and field events began in Berlin.

By this stage, Ireland had already won a silver medal in the rowing compliments of Gary and Paul O’Donovan, a bronze in the swimming pool over 50m backstroke for Shane Ryan.

For me what stood out most about the athletics in Berlin was the still-unpredictable nature of the sport, especially when seen as an introductory competition for many young athletes. We were so often introduced to the next generation of athletics stars, and many of the youngsters just seem to raise the bar with so much ease.

No one was better at this than Armand Duplantis from Sweden, still only 18 years of age, and already a master of the pole vault. In Sunday’s final, Duplantis sailed past the world record holder, Olympic and former three-time European champion Renaud Lavillenie from France, with such ease and surprise. He was never challenged, as he set World Junior and Championship records at 6.05metres, a height only five men in the history of pole vaulting have ever cleared.

Fearlessness and youthful exuberance each time the bar was raised – you could not help but be impressed. Talk about raising the bar.

It’s always hard to compare one sport with another, but more people can connect with athletics than any other sport. Running, jumping and throwing – it’s in our nature.

When Thomas Barr held on for the bronze medal over 400m hurdles on Thursday night, you got the feeling it one was of those occasions when someone in every house in Ireland was tuned in.

For me, the moment of the championship was watching 17 year-old Jakob Ingebrigtsen dare to ignore the experience of his elders, including his two older brothers Henrik and Filip, and steal a march on the whole field to take the gold, first over 1,500m, and then 5,000m. I could only look on in awe and admiration, not trying to comprehend how one so young could survive and absorb the amount of running required in order to compete at the highest level.

This was also the surprise shake-up that lit up the old Olympic stadium in Berlin, and I think something everyone could appreciate, even if they could not quite make sense how someone so young could be so dominant.

It wasn’t a lucky chance: this was a result of years of training and preparation coming to fruition, just at an age that most would not expect.

Sometimes we are a bit too rigid in the way things work, how we think things should be done and how inflexible we are sticking to tradition and how things used to be done. We continue to operate at the same level, expecting different results.

This may also need to be reflected in how athletes are selected for future championships. There was no real surprise performance for any of the Irish athletes, and the last time we had this was Barr at the Olympics two years ago. We need more of these unexpected performances to give hope for the future.

So often in Ireland we easily accept where we’re at and hope that next time will be better rather than ask some hard questions. What will it take to raise the bar again? There is a European Cross Country in the Netherlands in December, and then a European Indoors in Glasgow next March, and this is where more Irish athletes need to raise their own level of expectation, and show what they are capable of.

After that it’s on to the World Championships in Doha in 2019, and then the Tokyo Olympics 2020. The only good news is there is more than a year to prepare for Doha next September, where temperatures can hit 40 degrees – not the most attractive for any athletics meeting, whether you are running 100m or the marathon.

As much as the athletics grabbed the attention this past week, we may also need a few years to capitalise on the youth and junior success this year, and the focus needs to be narrowed and specific events aimed for.

It was interesting to see, with the availability of a gymnastics training centre in Abbotstown, that we are now seeing success in this area, with a gold medal on Sunday the highlight for Rhys McClenaghan. Following on from the success of the women’s hockey team, Irish Olympic sports are also becoming a lot more diverse.

For Irish athletes, that must all bring about a realisation that simply qualifying and getting on the plane is not good enough. More of them need to raise their own bar, maybe show a little more fearlessness, and push the limits out a bit more, rather than take the safe option.

1 ‘For 25 minutes I ran out of oxygen’: Pepe Reina on his coronavirus battle
2 Garry Ringrose to stay with Leinster as he signs two-year central contract
3 Australian rugby staring into abyss as another crisis hits
4 Dr Claire Molloy: ‘It is a privileged place to be, on the frontline’
5 Playoffs set to be moved again as Uefa prioritise European club competitions
Real news has value SUBSCRIBE

Playoffs set to be moved again as Uefa prioritise European club competitions 15:59
Harrington would prefer 12 picks over delayed Ryder Cup 09:06
Australian rugby staring into abyss as another crisis hits 09:03
Ringrose set for new central deal; memories of Björn Borg at Wimbledon 06:51
Seán Moran: What nostalgia tells us about how the GAA sees itself 09:05