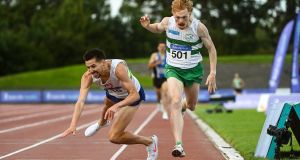 The evening breeze wasn’t ideal and the lack of spectators obviously not either, and still Paul Robinson and Sean Tobin produced a properly thrilling 1,500 metres to bring the curtain down on the first weekend of the National Track and Field Championships at Santry.

Few things in this sport still count as much as winning an Irish title, especially in this event, but for Robinson – who dived over the finish line to beat Tobin by the width of his running vest – it counted doubly so given all he’s endured since first winning this title nine years ago.

Now aged 29, the Kildare runner, from St Coca’s AC, hadn’t competed at the outdoor championships since 2014, the same summer he finished a close fourth at the European Championships in Zurich, as one injury after another repeatedly tested the strength of his will; he never gave up on it.

It was that strength of will which ultimately won him this title too, after he chased and then ran down what appeared to be Tobin’s unassailable lead over the final lap, before taking first place in 3:43.90, with Tobin, the Clonmel AC runner, clocking 3:43.92.

With reigning Irish indoor champion Andrew Coscoran from Star of the Sea AC taking third, some way back in 3:48.40, it also made for a clean sweep of medals for the trio who all train together under the Dublin Track Club and their coach Feidhlim Kelly.

“It’s absolutely fantastic, it’s been a long road back for me, six years since I last raced here,” said Robinson, who found himself slowly trying to claw Tobin back after he darted to the front from the gun and soon opened up a 30m gap on the field. “Sean ran his absolute guts out, he’s such a tough athlete and I knew he’d be tough to beat, in a great field, so I’m just thrilled with the win. I had an idea Sean was going to take it out, I just didn’t think he’d go from the gun.

“I thought I had him with 100m to go, didn’t think I did at 50m to go, but thankfully I had just enough to jump over the line. And a special thanks to everyone who helped me back, even over the last two weeks, where I had to move out of Kildare because of the lockdown, so to everyone in Kildare, this one is for you. Up the Lillies!”

Given the absence of some leading athletes, a couple forcibly so, there was always likely to be first-time title winners too, beginning with Darragh McElhinney in the men’s 5,000m, the 19-year-old from Glengarriff kicking past former 1,500m champion John Travers to win in 13:56.00, with another teenager, Efrem Gidey, taking third.

Amy O’Donoghue also won a first women’s 1,500m title, after three previous runner-up positions, the Limerick runner from the Emerald AC clocking 4:21.51, smiling down the homestretch as she finished ahead of Iseult O’Donnell from Raheny.

Absent from that race was Ciara Mageean, who at the Stockholm Diamond League earlier in the day found a third Irish record attempt in almost as many weeks proved a little too much, as Britain’s Laura Muir took the win in a world-leading 3:57.86, before Mageean finished in 4:10.99 back in 12th place.

Also missing was Nadia Power, the European Under-23 800m bronze medal winner from last summer, who was hoping for a distance double here, but, along with three-time European 800m medal winner Mark English, was prevented from competing due to the self-isolation requirements being imposed by Athletics Ireland, despite being free to compete under current Government guidelines.

Indeed, it was the first time in the 148 years of unbroken history of these championships that eligible athletes were excluded from competing by their own federation; unprecedented times, certainly, although Sonia O’Sullivan, commenting on the event for RTÉ, said: “It’s really disappointing that Athletics Ireland didn’t move along with Government guidelines, and change as things were evolving. If you break it down, it doesn’t make a lot of sense. They’re elite athletes, they’re training professionally, trying to make the best of themselves, and to do that, and then not be allowed run in their national championships, it’s hard to take that, for a lot of people.”

Phil Healy underlined her status as Ireland’s fastest woman to take a first 100m title in 11.71, ahead of sprint hurdler Sarah Lavin, with older sister Joan Healy third, while 22-year-old Chris O’Donnell from North Sligo AC overcame what he described as an “absolutely terrible” race to win a third successive 400m title.

Stephen Gaffney from UCD AC came away with the title of Ireland’s fastest man for 2020, winning his first 100m title in 10.63 seconds into a strong headwind, and Matthew Behan from Crusaders seemed to surprise even himself to win the 400m hurdles in 52.47, relegating club-mate Jason Harvey to a runner-up position for the eighth time. Nessa Millet from St Abbans AC won her second women’s title.

Among the field event highlights was Kate O’Connor winning a javelin title in 49.24m, before also finishing third in the high jump behind Sommer Lecky, the Finn Valley athlete winning her second title in a best of 1.79m.