Ciara Mageean falls short of another Irish record in Stockholm

She couldn’t find the form that has seen her set records over 800m and 1,000m 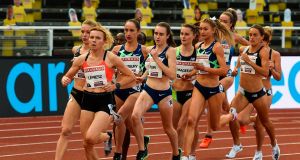 A third Irish record attempt in almost as many weeks proved a little too much for Ciara Mageean as she dropped off the pace of another super fast race at the Stockholm Diamond League.

This time targeting the 1,500 metres mark of 3:58.85, which has stood to Sonia O’Sullivan since 1995, Mageean instead found herself chasing the clock and the field in vain as Britain’s Laura Muir took the win in a world-leading 3:57.86, before Mageean finished in 4:10.99 back in 12th place, clearly not feeling or looking her best.

After the field passed 800m in 2:09.08, Mageean began to lose touch with the front pack as they entered the homestretch for the penultimate time. As Muir raced clear of everyone else, Mageean couldn’t find the sort of form that has seen her set Irish records over 800m and 1,000m in recent weeks.

The first of those came on as Diamond League athletics resumed on Monaco last Friday week, when she took over three and a half seconds off the Irish 1,000m mark which had stood for the last 27 years to O’Sullivan.

There were plenty of other scintillating runs in Stockholm, none more impressive than Karsten Warholm from Norway, who ran the second fastest 400m hurdles in history with his 46.87, also a European record, despite hitting the last hurdle. He was just shy of the world record of American Kevin Young, who ran 46.78 seconds back in 1992.