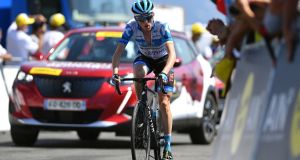 Daniel Martin is set to win his fitness race to feature in the Tour de France. File photograph: Getty Images

Dan Martin’s renowned capacity for pain and recovery is set to see him start his eighth Tour de France in Nice this coming Saturday.

That start will come just over two weeks after Martin withdrew from Stage 3 of the Criterium du Dauphine with a fractured bone in his lower back, presenting him with a sort of personal time trial to recover in time for the Tour.

Martin has spent that time recuperating at his home in Andorra, and he is now set to be confirmed as part of the eight-man squad of his team Israel Start-Up Nation, of which he is the leader.

The Irish rider had crashed during the high-speed finish on the Col de la Porte, the final climb on Stage 2, and although he rode on to the finish, he was later diagnosed with a non-dislocated sacral fracture.

Martin, who turned 34 last week, will make his first Tour start with Israel Start-Up Nation, and he’s already spoken about his Stage winning ambitions. In a video message sent via Israel Start-Up Nation, he further explained the nature of his injury and his hopes for as swift recovery. “I am really hopeful that I will be ready for the Tour de France,” he said. “It’s a shame as I felt I was in great shape but I’m a fast healer and I have reason to remain optimistic.”

He added: “It’s one of the weirdest feelings, I don’t have a scratch on me really, but I landed full force on the bottom of my back. Unfortunately we have a small fracture down there in my sacrum.”

In an interview with The Irish Times last month, he spoke about his renewed Tour ambitions with his new team: “We’re planning to approach the Tour slightly differently this year, just because of the way the season is set up. The plan is to step away from the general classification fight, and try for stage wins. That would be absolutely great for the team, and the fact the team are encouraging me to shoot for stages now, I’m looking forward to that approach.”

Martin made his Tour debut in 2012, winning Stages in 2013 and 2018, and came closest to the Tour podium in 2017, finishing sixth, riding the second two weeks with a broken bone in his back. He also crashed out at the prologue of the 2014 Giro d’Italia, which started in Belfast, breaking his collarbone in the process.

Nicolas Roche is also set to equal his father Stephen with his number of starts in the Tour de France - with that further extending his record for the most starts in Grand Tour history by any Irish professional rider. Roche has been confirmed in the eight-rider Team Sunweb for what will be his 10th Tour start, and his 23rd Grand Tour start in all.

Sam Bennett, who last week was victorious in Stage 3 of the Tour de Wallonie, will be the third Irish rider to start with his new team Deceuninck-QuickStep, also looking well capable of winning a first Tour stage in the three-week race.