Katie Taylor closes Persoon chapter to tee up another spectacle 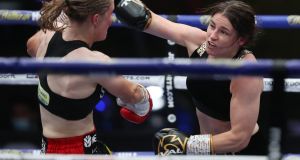 There seems nothing Katie Taylor loves more than dragging her court of followers through the emotional spectrum. The London Olympics final in 2012, Persoon One just over a year ago and again in Persoon Two on Saturday night. The Olympics was a tactical cat and mouse, Persoon edge of seat, shout out loud wars.

For sometime in the brutal encounter, where the Belgian’s basic tactic was to physically hurt Taylor to slow her down, Persoon Three looked like it could be in the making in the Essex back garden of her promoter Eddie Hearn’s Brentwood mansion.

An epic trilogy would have caught the imagination but Taylor’s boxing made Persoon Two less close an even contest than Persoon One and with it a closing of the Persoon chapter and none of the toxic fallout .

From the physical condition of both fighters after the match, a third bout would hardly be something Taylor would have wished for. “Give me a break,” she said when it was mooted. Although Taylor was sucked into a brawl at times - she learned from the first bout the importance of patience and discipline and to box clever - the blue print of how to pressurise her has been drawn.

That’s all ahead. Taylor earned the unanimous decision with a firm 98-93, 96-94 and 96-94 in her favour improving her career numbers to 16 wins and no defeats. With it she retained her lightweight world titles.

“She is going to come and come and come even when I hit her with clean shots and I know there are some stages where I’m going to have to stand there and fight and that’s why it is such a tough fight against her.”

Persoon was all grace after being beaten, knowing this time there would be no rematch. Instead there’s Jessica McCaskill, who Taylor beat in 2017 and the saga of Amanda Serrano set to rerun after the recent collapse of their agreement to fight.

“This time I respect the result,” said Persoon. “For me this time the weight was a little bit too much. For March I weighted 57 kilos but it was lightweight so I eat, eat, eat. So I feel like I didn’t have the power this time to hurt her. And if you don’t hurt her, it’s technical she’s good. She runs around and you have to hurt her and she’s away.”

These past 12 months there had been an irritating pebble in Taylor’s moccasin which was the question hanging over who won the first fight. That was laid bare afterwards when Taylor spoke of the relief of not having to think about Persoon anymore.

The match broken down was a tale of Taylor’s style and buzzing menace at the beginning and that being shaped by Persoon’s unrelenting go forward aggression - until a bloody battle of hearts closed the 10 rounds.

Persoon was a punching machine, whose aim was to smother and close the ring. While many of the Belgian’s punches missed as Taylor used the space to her advantage, she was also tagged.

Three rounds in and Taylor was setting the tempo and landing body shots as Persoon was clearly trying to make it a brawl and landed several good rights. Sometimes a little sloppy, Persoon’s quantity of punches thrown surpassed the quality and often in the scattergun approach hit only leather.

But in rounds six and seven the work rate went up and Taylor was feeling the Belgian’s intensity with round seven probably going to Persoon. The final rounds were Taylor alternately scrapping out of necessity and staying out of trouble and Persoon on the front foot chasing her opponent, knowing catching her was the only possibility of a positive outcome .

The judges see these bouts through the prism of clean punches and very often boxing skills and technical ability. Taylor had an abundance of those in the larder from the early rounds. But again a brutal and epic meeting that had Hearn purring with satisfaction will tee up Taylor’s next outing as a reaffirmation of the direction women’s boxing is taking and another possible spectacle.