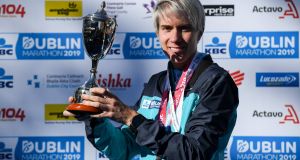 Aoife Cooke from Co Cork, who came first in the Irish women’s category of the KBC Dublin Marathon on Sunday. Photograph: Ramsey Cardy/Sportsfile

They all had the same 26.2 miles to run and promises to keep, but, on a day sent straight from marathon heaven, there was plenty of personal reward to gain too. And few finished the 2019 Dublin Marathon with more of that than Aoife Cooke.

Taking some 14 minutes off her previous best, Cooke clocked 2:32:34 to finish top Irish woman on the day, eighth best overall, in what was only her third proper attempt at the marathon distance. At age 33, still relatively young by marathon running standards, Cooke may be only getting going.

The Cork woman ran down Ann-Marie McGlynn in the closing two miles, finishing 20 seconds clear in the race for the National Marathon title, with Gladys Ganiel also making the most of the perfect conditions to run a personal best of 2:36:42 to finish third-best Irish woman, aged 42.

Outright winner Motu Gedefa from Ethiopia ran 2:27:48 to take the top prize of €12,000, with defending champion Mesera Dubiso second in 2:28:29. Both women continued the trend in recent marathon running victories by wearing the Nike ZoomX Vaporfly Next%, which claims to improve running efficiency by 4 per cent, possibly transferring to a 2 per cent improvement in marathon times.

Outright men’s winner Othmane El Goumri from Morocco was also wearing them, as was second-placed Stephen Scullion (though carefully concealed so as not to conflict with his official footwear sponsor). No surprise then that, in the aftermath of her breakthrough run, Cooke admitted to wearing the shoes too, which retail for a tidy €275.

“To be honest, they just feel comfortable, feel great when I’m running,” said Cooke, who runs with the Eagle club in Cork city, where she lives. “I don’t know how much of a difference they make time-wise. I have changed training a lot, and it comes down to that. There might be some marginal gains, but I’m not a scientist, so I don’t really know.”

“A lot of miles, a lot of hard training. That 2:46 previous best was back in 2017, and I focused on shorter distances for a while, then back in December I started working my with my new coach, John Starrett, who is based in Tralee. We changed up the training, a lot of long miles, up to 20 miles, and that suited me.

My whole lifestyle changed, evolved around getting enough sleep, nutrition and recovery in between all the training

“So John has really pushed me, built me up to running 100 miles a week, and very marathon-specific, long-tempo runs, which have obviously benefited me. I was confident once I get to two miles to go, I could push on from there, and yeah, by far the best run of my life. And the support all around just drove me on. It’s emotional, unbelievable, and just trying to hold back the tears, really.

“It’s only really the last year that running became the proper priority as well. My whole lifestyle changed, evolved around getting enough sleep, nutrition and recovery in between all the training.”

Working part-time as a personal trainer in Cork, Cooke is now closing in fast on possible Tokyo Olympic qualification. “It’s been a gradual process to get back to this point. I won some juvenile titles, back at age 15, 16, then in college had injuries, stress fractures, and fell out of running for a while. I came back about six years ago.