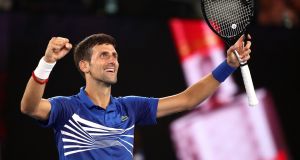 Novak Djokovic left Lucas Pouille in a heap after three mercifully quick sets to reach his seventh Australian Open final – where he has never lost – and his dazzling performance will have given Rafael Nadal much to think about before Sunday.

The world number one was magnificent and as ruthless as in any win since his year of years, 2011. He started the match with an ace and drilled 24 clean winners past his bewildered opponent in just an hour and 23 minutes. It was the tennis equivalent of Anthony Joshua fighting Piers Morgan.

As the loser succinctly put it later: “He just played amazing.”

Djokovic’s verdict was almost mystical in its interpretation. “Every professional athlete wants to be in the zone, where everything flows so effortlessly and you are executing automatically everything you are intending to execute. You don’t need to think too much. I guess you’re driven by some force that takes over you and you feel divine, you feel like in a different dimension. It’s quite an awesome feeling that we all try to reach and stay in.”

In truth, it was a mismatch. As a public execution, it would have drawn an awed crowd to the Bastille; as a warning to his Spanish rival, it was tantamount to a declaration of war. So, the most blood-spattered rivalry in tennis – across 52 matches – is extended in a perfect setting: a major final between the No 1 and No 2 players in the game. Djokovic leads their personal tally by two; Nadal has 17 major titles, Djokovic 14. Roger Federer has 20, and has stalled. There is plenty of history left to write in this extraordinary era.

Poor Pouille, who played as well as has ever done to reach his first major semi-final but had to fight through three four-setters and one five-setter among his battles in more than 15 hours on court, much of it in fierce heat, arrived in good spirits and left as a statistic. Djokovic has now not lost to a Frenchman in 28 straight slam contests. Jo-Wilfried Tsonga, who fell to him in the second round, was the last to beat him, in the quarters here nine years ago.

French woe was compounded as Amelie Mauresmo, who won here in 2006, looked on from Pouille’s box. She knows a little about watching Djokovic win at close quarters, having been in Andy Murray’s corner for 10 defeats in 11 matches against him.

Djokovic served two aces in the opening game and did not take his foot off Pouille’s throat until the end. There was hardly a moment of parity, Pouille’s occasional best efforts bludgeoned into irrelevance as Djokovic moved over the court with his familiar elasticity and menace. He built his attack on a serve that nagged at Pouille’s defences, and he won a staggering 32 of 38 points on first attempt, 13 of 15 when he had to serve twice. Two of his six aces came off second serves.

There have been some absurdly quick matches in grand slam history – many of them buried in the distant past – but, in the Open era, only six have witnessed the loser compiling fewer games. Asked if he trying to better Nadal’s 6-0, 6-2, 6-2 win over Stefanos Tsitsipas the previous day, he said, simply: “Yes.”

This was also the second shortest completed match of this tournament, behind Tomas Berdych’s second round win over Robin Haase in an hour and 19 minutes. And Djokovic had the luxury of a 52-minute workout in the quarters when Kei Nishikori retired in the second set after winning just two games.

A seventh title would put him alongside Roger Federer and Roy Emerson in Australian tennis history, but Nadal, who has gone through this tournament like a knife in hot butter, will not be blown away like Pouille was – unless he is struck down by injury, as he was in the quarters last year. Failure to finish – or sometmes even start - became a recurring nightmare for the Spaniard in 2018, although he still won five titles, including another French Open, from nine appearances.

This year – having withdrawn from the Brisbane open to guard a thigh strain – he has moved and hit with his trademark muscularity, sweeping aside old and new with equal efficiency: from the rising stars, Alex de Minaur and Frances Tiafoe, to long-time rival Berdych. None could push him into a fourth set.

Now it gets serious. His history with Djokovic is long and glory-filled. He lost a terrific semi-final at Wimbledon last summer, which the Serb agrees was the turning point in his comeback.

Here in 2012, they played in one of the great finals in the history of the sport – the longest slam decider of them all at five hours and 53 minutes. Djokovic, coming off his best-ever season, carried his form through that tournament – beating Murray in an equally draining semi-final – before taming Nadal in five sets.

Asked how he would describe that struggle to his children, he smiled and said: “I’ll probably not have them sit down and watch it because I don’t like my children to watch TV that long. But I would probably present it in more a general concept of our rivalry. That match would be the icing on the cake. Throughout my life and career, Nadal been the greatest rival that I ever played against on all surfaces. Some matches were a great turning point in my career. I feel they have made me rethink my game.”

Like a football team knocked out of a cup, Pouille wants his tormentor to go on and win, to validate his own effort. But he is not predicting another blitz in the final. “When he’s playing like this, he’s the best in the world, for sure,” he said. “We’ll see on Sunday how he goes, because Rafa looks pretty amazing, too.”