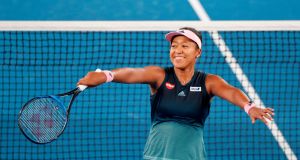 Osaka produced a brutal display of power hitting under the roof on Rod Laver Arena, striking 56 winners in a 6-2 4-6 6-4 victory and will face Petra Kvitova on Saturday.

The 21-year-old’s achievement makes her the first women to back up a first slam title by making the final of the next major tournament since Jennifer Capriati in 2001.

As well as the title, the world number one ranking will also be on the line on Saturday, with Kvitova and Osaka both looking to get there for the first time.

Capriati followed her maiden title here 18 years ago by winning the French Open and, if Osaka can maintain the form she showed in this match, then there is absolutely no reason why she cannot emulate that.

Having survived tough battles against the unconventional pair of Hsieh Su-wei and Anastasija Sevastova earlier in the tournament, Osaka certainly looked more comfortable taking on a fellow ball-basher.

And bash the ball she did, repeatedly into the corners, off both forehand and backhand, to win the first set.

Osaka had won her previous 58 matches after winning the first set but — following her remarkable comeback to beat Williams — Pliskova would have known that no cause was impossible.

Osaka broke serve again at the start of the second set but then gave it straight back with a poor game and slowly the momentum began to shift, the two women trading fiercer and fiercer blows.

Osaka produced some fine play to hold off her opponent at 3-4 but two games later Pliskova broke to love to take the match to a decider.

The 26-year-old, who reached her only slam final at the US Open in 2016, looked to continue her momentum at the start of the decider but Osaka saved three break points before playing a tremendous return game to move 2-1 ahead.

Pliskova had one chance to get back on level terms in the eighth game but Osaka served an ace, and then another one — given by HawkEye — to clinch the victory.

Earlier, Kvitova blazed her way into her first final with victory over Danielle Collins under the roof on Rod Laver Arena.

With temperatures soaring towards 40C (104F) in Melbourne, the tournament’s new extreme heat policy came into play and the roof was closed with the score at 4-4 in the first set.

Kvitova, who has struggled in the past in hot conditions, found the cooler temperatures much more to her liking and powered to a 7-6 (2) 6-0 victory in an hour and 34 minutes.

This is the Czech’s first grand slam final outside of the two Wimbledon titles she won in 2011 and 2014, and she said: “It means everything.

“That’s why I really work very hard to be in the finals of tournaments. Finally I could make it deep in this major and I will enjoy the final whatever happens. I’m really very, very happy.”

Asked about the closing of the roof, Kvitova said: “The first set was very tight, I was pretty nervous. I think I was happier than the fans that the roof closed. I like playing indoors. It was kind of warm. If it was open I was still going to fight so it doesn’t really matter.”

England need 36 to win as bad light halts play in Sri Lanka 13:04
Bríd Stack hospitalised after injury in AFLW pre-season friendly 11:28
India rearguard frustrates Australia and leaves series in the balance 11:19
Brendan Steele takes the lead at Sony Open with a round of 61 11:10
Man United head to Anfield as top dogs but Liverpool know how to respond 11:03