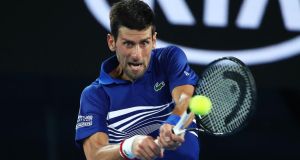 Novak Djokovic of Serbia plays a shot during his fourth round match against Daniil Medvedev. Photograph: Scott Barbour/Getty Images

If the guard is changing at the summit of tennis, it is doing so slowly and without conviction, as Novak Djokovic steps into the void left by the departure of Roger Federer. After eight days of the fortnight, the world number one is again instilling fear into his side of the draw, as he lurks - fit, seasoned and determined - three matches away from a record seventh Australian Open title.

Melbourne (and maybe the tournament) was said to belong to the 20-year-old Greek force of nature, Stefanos Tsitsipas, after he put 37-year-old Federer out of the tournament the previous day, and Daniil Medvedev, a mere 22, would, according to many good judges, give 31-year-old Djokovic plenty to think about in the fourth round.

Well he did - but not quite enough to prevent Djokovic striking another blow for the old guard on Monday night.

“The fourth set, he started playing well again. Even though it was three sets to one, it seemed like a five-set match. It was draining physically, because you just could not rely on one-two punch tactics.”

Looking ahead to the quarter-final against Kei Nishikori on Wednesday, he said, “Kei won another marathon match. Congratulations to him for fighting back from two sets to love and a break down. He’s a fighter. He’s a very talented player. One of the quickest players on the tour.

“I have lots of respect for him. We played here several times, once in the quarter-finals. Every year is different. Every match that you play against each other is different. I expect him to come out trying something new.

“I have beaten him many times in the past couple of years on different surfaces. There were a couple of very close matches. I expect a tough one.”

In three and a quarter hours he secured a place in his 10th Australian quarter-final, this time against Nishikori, whom he has beaten 15 times out of 17. The Japanese shot-maker, too often cruelly cut down by his physical frailties, had to grind out a five-set win in five hours and five minutes, the longest match of the tournament so far against Pablo Carreno Busta.

Medvedev, the first Russian to get this far in Melbourne since Nikolay Davydenko in 2010, arrived with form and confidence, having beaten Andy Murray in two sets in Brisbane, but Djokovic had too many gears for him. Djokovic joked on court after his ordeal: “Since I guess my next opponent is watching, I’m feeling fantastic. I’ve never felt fresher in my life.”

As he flexed his biceps to the amusement of the crowd, there was an echo of the old Djokovic, who would rip apart his shirt in animalistic intent. He is gentler now, he says, more contemplative. But he will have to muster up a deal of those instincts to keep the remaining tenders at bay.

Tsitsipas - hailed in an on-court interview by John McEnroe on Sunday as leading the “changing of the guard”, which did not amuse Federer - is clearly a wonderful talent, as is Medvedev. But the old boys are not going quietly.

For most of their fourth-round match on a mild Monday night on the Rod Laver Arena, Medvedev, whose hard, flat hitting resembles the Serb’s, fought for each point as if it were the last, but the quality of the firepower coming at him was such he needed regular places to hide or rest. No such places existed in the first set.

He forced a tie-break in the second. There comes a moment in nearly every big tournament when Djokovic finds his inner mongrel, as they say here, the beast he cannot tame, that drives him on to remarkable heights. There were clear signs of it in this match.

Earlier, the acknowledged leader of the young lions, Alexander Zverev, was so completely defanged in his match against Milos Raonic he was driven to the most spectacular wrecking of his racket in the second set. It was an exhibition of which Stan Wawrinka would have been proud, if more theatrical.

And it did him no good at all. On the other side of the net, Raonic, one of the game’s cooler customers, waited and slowly took to pieces the young German’s high-intensity game to win 6-1, 6-1, 7-6 (5) in just under two hours. Zverev said later of his meltdown: “It made me feel better. I was very angry, so I let my anger out. In the third set, I started to play a bit better, but it was too late.”

Raonic said: “That can have an effect a lot of different ways. If you’re a top guy and you do that against somebody who doesn’t have experience, it might cause them to retreat a little bit. I have faced that situation, and I was also ahead at that point, so I was just focusing on myself.”

The powerful Canadian, a sleeper in this draw given his intermittent absences from meaningful charges in slams, plays Lucas Pouille, seeded 18, another whose chances have not been discussed widely. Raonic, still only 28, and ranked 17 in the world, has won his three matches against the Frenchman, who lurks on the edge of the seedings at 31, and has a modest slam record, winning 24 of 43 matches, but who did the job when asked here against yet another of McEnroe’s young guards, Borna Coric, winning 6-4 (7), 6-4, 7-5, 7-6 (2) in three and a quarter hours.