Coronavirus pandemic means qualification could come down to a single event 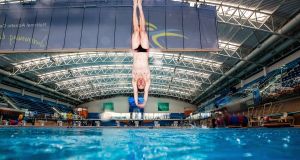 Here we go again. Some elite athletes may be closing out whatever intent is left of their pandemic winter, others still to get started, only for Oliver Dingley there is the added uncertainty of not knowing when he’ll be next standing over the proverbial deep end.

Because in the wait for when and not if next year’s Tokyo Olympics come around – and that is now the gospel according to the International Olympic Committee (IOC) – Dingley will have gone over a year since he last competed in the 3-metre springboard diving event, where he made a proper splash in Rio four years ago.

That’s hoping he even gets there: the first Irish Olympic diver since London 1948, Dingley hasn’t yet qualified for Tokyo, which is exactly what he was trying to do in his last dive in Madrid, back in February. Covid-19 took care of all competitions since then, and for now the next date on the calendar is the qualifying event in April, in Tokyo, at the now 2021 Olympic pool.

It may be his one and only chance, some test events in January and February already postponed, a virtual competition next month all he’ll have to gauge off. Still his desire to remain in peak physical condition has been unwavering.

“It probably will be over 12 months since I’ve had a proper competition, against fellow competitors, in a proper dive competition,” says Dingley. “I’ve been lucky enough to make one Olympics, and I really hope I get to do it again. And it would be fantastic to say, looking back, we got through it.”

Dingley has been announced as one of the 25 Dare to Believe ambassadors for the Olympic Federation of Ireland (OFI), sponsored by FBD Insurance, visiting schools across the country to help inspire some younger sporting aspirations. No better man: 28 later this month, Dingley already surpassed most expectations to make that final in Rio, finishing an excellent eighth overall, and he’s also talked openly about some of the anxiety that came in the aftermath.

“From the IOC point of view, the Olympics are going ahead,” says Peter Sherrard, OFI chief executive. “What is to be determined is what shape they will take, based on the mitigations measures that might need to be put in place. But at this point it’s not a question of if, but how.”

For Dingley that brings both excitement and pressure. He’s taking nothing about Covid-19 lightly, not when his grandmother Audrey Stamford is in a nursing home in the UK, and currently has the virus (Harrogate-born Dingley qualified to represent Ireland through his other grandmother, Ivy Offen, originally from Spike Island in Cork).

“She’s in a nursing home and the virus has gone straight through it. She also has really bad Alzheimer’s but so far, it’s been over a week, and we’re only hearing good things at the moment, so fingers crossed.

“Right now, preparations are going smoothly, I’m still lucky enough to be able to train, so that normality is still there. Like many other sports, in the diving world we’re just trying to get our head around different ideas. Like the online competition coming up in early December, where I will film my dives over two days, and there is a code where we only get one chance to record each dive, like it was a competition. They’re sent in, and officially judged.”

Dingley has taken on other responsibilities since Rio, gone back to college to study film and broadcasting, which helped spawn his podcast series Life in the Bubble, which went out during the first lockdown.

“I had a hard period of my own after Rio, especially with anxiety. Anxiety has always been there for me. If you can imagine what it’s like to stand on the end of a wobbly metal diving board, which can shoot you off any direction, and try to be one of the best in the world in what you do.

“Competing at the Olympics is such a huge, intense, event, and I had the time of my life, but sometimes it’s afterwards when those things come more to the forefront, and mine happened to be 2017. I don’t think it was anything to do with the Olympics, it was just me at a period in my life,

“I also struggled with dyslexia, hated school, wanted to finish as soon as I could. I’ve been competing at a high level since my late teens. At 5 o’clock each day I’d go into my bubble, which was diving, where I was excelling, found something I was really good at.

“So I just came to a sort of crossroads. The extra year has also allowed me to take a step back, figure out how I could make myself better, and if anything I have made some very good gains over the last couple of months.”