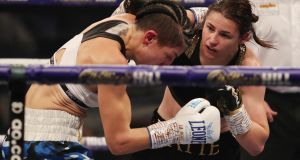 Undisputed lightweight champion of the world Katie Taylor closed 2020 with the 17th win of her professional career. A unanimous decision win in the Wembley Arena over Spain’s Miriam Gutierrez confirmed the Irish amateur Olympic Champion as possibly the best pound-for-pound trader in women’s boxing.

Taylor controlled the bout from the opening seconds and schooled the brave Spaniard until the end, just failing to finish the fight at the end of the fourth round when Gutierrez hit the canvas just before the bell.

Taylor won every round comfortably against the mandatory challenger and never once looked in distress. Gutierrez was strong and resilient but came up well short after 10 rounds.

Taylor began at pace and forced Guttierez into the corner, threatening an early finish. But the 36-year-old toughed it out for a further nine rounds, taking heaps of punishment but staying in the bout until the end.

The three judges scored the fight 100-89, 100-90, 99-91 in a heavily one-sided card, Taylor showing her class, speed and hand movement and Gutierrez showing heart. It was an inevitable end and maybe Taylor’s only concern was that it was not over faster.

It leaves the five-times amateur world champion as one of the main figures at the top of women’s boxing and looking towards 2021 for at least four more lucrative fights.

Gutteirez was under pressure for the entire bout, surviving the fourth round but never suggesting she was an equal partner. Taylor scored at will throughout with combinations and occasional shuddering rights but not enough to stop the Spaniard.

It was no contest. Taylor moves on. Still undisputed lightweight champion and still the fighter to beat in world boxing in and around the lightweight division.