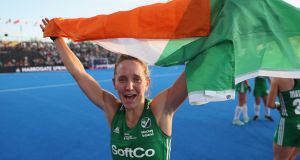 Nicola Daly celebrating Ireland’s win over India in the World Cup quarter-final. “You spend your whole career waiting for an Olympic Games. We waited a long time and it’s been a year since we’ve qualified. You’re looking forward to that moment.” Photograph: Christopher Lee/Getty Images

On the face of it, Nicci Daly seems to be pleasantly pulled in three directions. But in reality, it’s just one. That’s Tokyo next year now that the Olympic Games is a ‘probably definitely’ rather than the ‘maybe possibly’ it was six months ago.

A Venn diagram of motorsport, Gaelic football and hockey would have Daly comfortably placed in that small space in the middle, where all three sporting circles intersect.

Born into motor sport through father Vivion and uncle Derek with work experience as a data engineer on a motor racing team, a former Dublin county footballer and now on the cusp of being among the first group of Irish women ever to compete in hockey at the Olympic Games, Daly is busy in lockdown.

It was a year ago Ireland qualified for Tokyo after a two-match series against Canada in Donnybrook. Margins credit-card thin. Another shoot-out at the end of two draws. But there is a new trajectory after postponed Tokyo.

By now Ireland should have made their history and set sights on other goals. Daly at 33-years-old should have been pivoting towards something else as a 2018 World Cup silver medalist, a first Irish female Olympian and immersed in a possible career in motor sport, which had been idling.

“After I retire from hockey it would be nice to go back into that environment and try to do a little bit of work with a motorsport team – maybe in a different role, who knows? But yeah, I’ve had a bit of experience working in racing,” she says.

“I went to the States for about two years and worked as a data engineer for the IndyLights programme with Juncos Racing. That was 2016-2018 – on and off, in between hockey, I did a full racing season with them. I did an off season with them as well in 2017.

“Since coming back in 2018, after the World Cup, it was preparing for the Olympics. After the World Cup we entered a semi-professional program and it just didn’t allow me to keep working in that sport as I’d like to.”

Adjustments have been part of what this year has been about. Athletes’ worlds revolve around routine and certainty. It has been tough, less routine, even less certainty. The squad don’t know yet what the program will look like in the new year.

The hope is it can replicate the blown up 2020 program they had set out for this year between January and July with an emphasis on warm weather training camps to mimic the conditions expected in Japan. But a crystal ball is needed to see even as far as New Year.

“You spend your whole career waiting for an Olympic Games,” she says. “We waited a long time and it’s been a year since we’ve qualified. You’re looking forward to that moment. It was definitely tough to take at the time.

“We didn’t really know what was going to happen. It was hard to stay motivated. But now that we’ve gotten some positive messages coming from the Olympic Federation and Japan, in the sense that they are preparing for an Olympics, Covid or no Covid.

“As a player that’s getting a little bit older, I’d seen Tokyo as being the end for me. The training is tough. Sean [coach, Dancer] really emphasises a lot the physical side of the game and trying to run a lot with the ball, to be more of an attacking team. Is my body going to be okay tomorrow? Will I be able to keep going with what’s being asked of me? Having that down time is nice.”

With club hockey brought to a halt in Ireland, the Irish players have had to make do with inter squad matches at weekends. It doesn’t have the competitive edge but it is needs must. At least they’re getting the sense of playing in teams against teams.

Daly also knows she also belongs to what has been a golden age of Irish hockey. A golden generation that actually made a World Cup final, a level that Irish teams before, male or female, could never have dreamed of achieving.

It’s only in recent years that Irish hockey has been able to qualify for Olympic Games due to the improved political environment following the Good Friday Agreement. But by any metric this group of players have been the most successful in the history of the game in this country.

In addition to Japan, there is also a European Championships, normally the main event of the year. The tournament will be held alongside the men’s event at the Wagener Stadium in Amstelveen, Netherlands.

It was originally scheduled to take place from August 20th to 29th, 2021.However, following the Covid-19 postponement of the 2020 Summer Olympics to July and August 2021, the tournament was rescheduled and will take place over the first two weeks of June next year.

“I know that what we would like to see happen, which was in and around warm weather training camps,” says Daly. “We know that Tokyo is going to be [one of] the hottest Olympics in the history of the Olympics so getting into those environments, and training and playing in those conditions is really important for us.

“We want to go away in January. Whether or not the virus will allow that to happen, or current restrictions . . .Obviously we’ve got a European Championships to prepare for, which wasn’t in the original plan. So it adds two major competitions into our schedule for next year.

“You know, I’m getting a bit older, how do I manage the mental, physical, emotional rollercoaster that that all brings. Then also trying to stop and think about where I’m going with Formula Female.”

Formula Female is the initiative in which Daly has been involved that tries to bring more women into motorsport. Then there’s Ballyboden Wanderers, her GAA club. But for now it’s hockey, it’s Tokyo. A life goal finally looming into view.