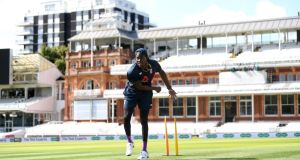 The advent of any Test debutant is a source of excitement. But some are more exciting than others. On Wednesday, if the weather permits, Jofra Archer becomes the 693rd man to play for England.

Expectations are unusually high for Archer but he does not seem too bothered by that. He is not the first cricketer to come from overseas to be picked almost immediately once the regulations allow. For these players the leeway given to a newcomer to Test cricket does not necessarily apply.

Joe Root must be hoping that Archer makes an impact well beyond the scope of the “normal” debutant. It has happened before when “special” novices have been involved. Tony Greig in his first Test – against Australia in 1972 - top-scored in both innings and took five wickets as England won. Kevin Pietersen, making his debut in the first Test of the 2005 Ashes, was also the highest scorer in each innings at Lord’s albeit in an England defeat. In both instances it was immediately apparent that the debutant would be around for a while.

Sometimes high expectations are unfulfilled. In 1991 the assumption was that Graeme Hick would hold sway in Test cricket just as he had done on the county circuit. He began with two scores of six against West Indies at Headingley and subsequently his Test career was a surprising struggle. In 1993 Andy Caddick, who would go on to take 234 Test wickets for England, played his first match at Old Trafford, where Shane Warne flummoxed Mike Gatting with his first ball in Britain. Meanwhile, Caddick tiptoed anonymously into international cricket taking one wicket in an emphatic defeat.

Archer will hope for better than that at Lord’s where batting has been more of a trial this summer. The groundsman, Karl McDermott, has left some green grass on his pitches, no doubt in search of pace but also to prevent the surface breaking up. He must have been stung when Root described his pitch for the game against Ireland as “substandard” (even though it was the type of surface that England might like when playing the Australians). No doubt McDermott is hoping for more runs this time but with a forecast of rain and cloud and an absence of sunshine that is not inevitable.

Root and Trevor Bayliss must decide what is their best attack and how to use it. They have just one player to omit. That could be Sam Curran; if the rain persists and the match is significantly shortened it might be Jack Leach and there is the outside possibility of Root giving himself countless options in the field by playing Curran instead of Joe Denly, a move that is unlikely to be instigated by the national selector, Ed Smith.

Once that decision has been made they can turn to who shares the new ball. At Edgbaston Stuart Broad and Chris Woakes were able to make early inroads at the start of the Australian innings; in the World Cup Archer was always given the new ball.

Whoever England choose Root will have more options than at Edgbaston, where Jimmy Anderson was able to bowl only four overs in the match. Oddly, Justin Langer and his management team have focused more on this than the England camp in between the Tests. They have highlighted how handicapped England were by Anderson’s absence – in hindsight Root really could have done with some of his overs when Australia were languishing at 122 for eight in their first innings.

Langer, understandably, is eager to banish any notion among his players that England are now there for the taking after Australia’s win in the first Test. He is not the man pointing out that England have come back from 1-0 down to win an Ashes series only three times in a century.

The Australians will be piling the pressure on Root. He has overseen 15 Test victories as captain in 29 matches – only six other Englishmen have more to their name – but the draw has almost been removed from the equation under his watch – there have been just two of those. Moreover, his record against Australia currently stands at played six, lost five with a bore draw in Melbourne. He needs an Ashes victory soon.

However, Australians tend to be motivated by playing at Lord’s and their tour party has arrived in London in good heart – that must be the case if Langer is already guarding against complacency. They have named their 12, which excludes James Pattinson but includes Josh Hazlewood and Mitchell Starc. They are confident enough to embark upon some rotation among their pace bowlers. They will end up choosing between Hazlewood and Starc, which highlights their strength in this department.

The tourists must have been most reassured by the contributions of their middle order at Edgbaston, where Travis Head and Matthew Wade thrived alongside Steve Smith. How did we get this far without mentioning him? Already it is taken for granted that Smith has resumed as the pillar of Australia’s batting and after just one match he has addled a few English brains.

Perhaps the extra pace and the fresh, uncomplicated outlook of Archer might help here. Indeed, England would be content if their debutant took just two wickets in the match provided his victim was Smith on both occasions. – Guardian