Tsitsipas, Zverev and Wawrinka all through to last 16 in Paris 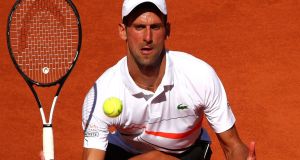 Novak Djokovic plays a volley during his third-round match with Salvatore Caruso at the French Open. Photograph: Clive Brunskill/Getty Images

Djokovic has never lost a Grand Slam match to a player ranked as low as Caruso, and never showed any sign of doing so on Saturday, breezing to a two match-point advantage in little over two hours. He only needed one of those to put Caruso, ranked 147 in the world, out his misery.

The Serbian is yet to drop a set in the tournament and has rarely had such an easy run into the fourth round at Roland Garros. He will face either Germany’s Jan-Lennard Struff or 13th seed Borna Coric of Croatia next.

“The conditions were very hot today, different to the days before and so tough physically,” Djokovic said after the game, under a blazing sun on the Philippe Chatrier court. “I’m feeling motivated, I’m feeling at home.”

Djokovic is bidding to win his 16th Grand Slam title.

Greek sixth seed Stefanos Tsitsipas dug deep to book his place in the fourth round, completing a 7-5 6-3 6-7 (5) 7-6 (6) victory against Serbian Filip Krajinovic after play was suspended on Friday night.

For his second straight last-16 appearance at a Grand Slam, the 20-year-old Tsitsipas set up a potentially explosive clash with 2015 Roland Garros champion Stan Wawrinka after the Swiss wrapped up a 7-6 (5) 7-6 (4) 7-6 (8) victory over Bulgarian Grigor Dimitrov.

That match was also interrupted on Friday night and Wawrinka had the court One crowd on their feet as he rallied back from 6-2 down in the third-set tiebreak.

Earlier, Tsitsipas resumed his match at 5-5 in the third and looked wobbly in losing the tiebreak before finally winning in four sets thanks to his opponent’s nerves on Court Philippe-Chatrier.

A runner-up in Madrid and semi-finalist in Rome in the run-up to the claycourt Grand Slam, Tsitsipas had breezed through the first two sets and appeared on the brink of a no-nonsense win when play resumed in searing heat on Saturday.

But Krajinovic threw everything he had at Tsitsipas, which unsettled the 20-year-old.

Two straight double faults handed a break to Krajinovic in the fourth set, but the Serbian let his guard down and allowed Tsitsipas to get another crack at a tiebreak.

The Greek saved a set point as Krajinovic lost his composure, hitting long on the first match point.

It took Alexander Zverev all five sets again as he advanced with a 6-4 6-2 4-6 1-6 6-2 victory over Serbian Dusan Lajovic on Saturday.

The German fifth seed, who fought his way through a five-set thriller in the opening round, threw away a two-set lead against the 30th seed on Court Simonne Mathieu before setting up a meeting with Fabio Fognini.

It was a highly inconsistent performance by the lanky 22-year-old Zverev, who will need to sharpen his focus against the Italian ninth seed.

Zverev did not make things easy for himself as he fell 3-1 behind in the opening set before managing to turn things around and take the lead.

He raced through the second only to find himself on the back foot again in the third and fourth as Lajovic forced a decider with temperatures flirting with 30 degrees Celsius – a contrast with the chilly weather in the first week of the tournament.

After an early trade of breaks in the fifth, Zverev finally got his confidence back and finished it off with a whipping forehand, his 52nd winner barely making up for a woeful 55 unforced errors.