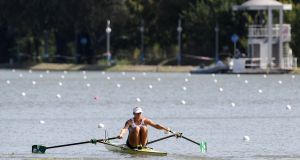 Sanita Puspure is into the finals in Switzerland. Photograph: Detlev Seyb/Inpho

Two Ireland crews qualified for A Finals at the European Rowing Championships in Lucerne, Switzerland, on Saturday.

Sanita Puspure took second in her semi-final of the single sculls. The world champion took on the 2012 Olympic champion in Mirka Topinkova Knapkova of the Czech Republic. The silver medallist from the London Games, Fie Udby Erichsen, was also in the hunt for a top-three place which would see her progress.

These three crews moved clear of the rest, with Puspure finishing ahead of Erichsen, and the Czech crossing the line first.

Jeannine Gmelin of the host country won the other semi-final, which was marginally faster. Lisa Scheenard of the Netherlands and Austria’s Magdalena Lobnig took the other qualifying spots. All three will provide serious opposition for Puspure.

Fintan and Jake McCarthy had given Ireland their first A Finals place. The Skibbereen twins got the chance to represent their country at the top level in the lightweight double sculls because of the absence of Paul O’Donovan due to medical exams. They have grabbed it with two pairs of hands.

Their semi-final was a good race. Germany headed off fast and built a lead, while Spain and Ireland fought it out directly behind them, with little between them. It stayed that way to the line, as a late charge by the Czech Republic could not upset the order, and the vital three qualifying spots. Their third place will give the McCarthys an outside lane in the final - but they are there.

The semi-final of the women’s lightweight double was less productive for Lydia Heaphy and Denise Walsh. The new crew never troubled the leaders. They finished sixth and will have a B Final on Sunday.

The double of Ronan Byrne and Philip Doyle are going into their second season together. They came up against the world champions, France, in their semi-final - and will have learnt from the experience.

The Irish seemed well set to finish in the top three, holding second behind the Netherlands at 1,000 metres and third at 1500 metres, with Britain edging into second. But France, who had come through a repechage, finished better than the Ireland double, pushing them into fourth and a B Final place.

Gary O’Donovan’s challenge in the lightweight single sculls also ended with a fourth-place finish, this time in the C Final, which placed him 16th overall.

The Skibbereen man, who has been recovering from a wrist injury, looked in contention for second place in the closing stages of a race dominated by Rainer Kepplinger of Austria. Greece, Sweden and Ireland fought it out, but O’Donovan dropped back to take fourth, with Greece and Sweden taking second and third behind Austria.