Anthony Joshua set for his bow at Madison Square Garden 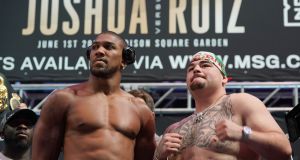 There was a laid-back energy to Anthony Joshua as he charmed and held court with the mostly American media corps backstage at the historic Beacon theatre on Thursday afternoon, the latest station of his brand-building whistle-stop tour in the run-up to his debut on US soil.

Joshua (22-0, 21 KOs) will climb through the ropes on Saturday night at Madison Square Garden to defend his WBA, WBO and IBF heavyweight titles against Andy Ruiz Jr, a replacement opponent dialled in on five weeks’ notice when Brooklyn’s Jarrell Miller was popped for three different performance-enhancing drugs in three separate tests shortly after the fight was announced.

“I respect Ruiz for stepping in,” Joshua said. “He saved the show, so I’ve got lot of respect. Even though we’re gonna beat each other up, he’s the one who put his name on the dotted line, so I’ve got to give him his credit. I respect him for that.”

Yet the spectre of a summit meeting with Deontay Wilder, who has held the WBC’s version of the fractured heavyweight championship since 2015, continues to dwarf all other goings-on in boxing’s bellwether division. Left only with common opponents as a yardstick, the American made a compelling statement across the East River only two weeks ago with a 137-second destruction of Dominic Breazeale, a fringe contender who lasted seven rounds with Joshua in 2016.

It was an imperative, it seems, that fell on deaf ears in the Joshua camp. “I just feel like we’re separate, my competition is with myself,” the 2012 Olympic gold medallist said. “I look forward to matching Deontay Wilder in the ring, that’s better to compare, not with opponents, just me and him.”

It has been easy to forget there is an immediate task at hand in New York beyond the long-range goals of building up a profile, for all Joshua’s fame back home, that is nonexistent beyond hard-core boxing fans in the US. The durable Ruiz is a credible opponent coming off three consecutive victories, including a fifth-round knockout of Alexander Dimitrenko last month, since absorbing his lone career defeat against Joseph Parker in 2016.

But Ruiz’s physical shortcomings that were laid bare when the fighters faced off at Thursday’s final press conference – glaring concessions in height (four inches) and reach (eight) will look even more pronounced on Saturday night when the chiselled Joshua disrobes opposite the roly-poly challenger, who is a 10-1 underdog on merit.

“I’m not gonna lie, everybody speaks about: ‘Oh, I’m fully focused on June first,’” Joshua said. “Well, I am, that’s what I’ve been practising and preparing for, but you can’t not look at the bigger picture. I’m not looking past him but I definitely put blinkers on to see the potential of, if I beat this guy what’s out there for me to keep me motivated to get in there on Saturday and put on a good performance.”

The collective instinct to look beyond this fight was further spurred on Tuesday when Wilder announced a rematch with Cuba’s Luis Ortiz later this year, ruling out hopes of a summit meeting with Joshua this decade.

Wilder (41-0-1, 40 KOs) has carved out a reputation as the most devastating puncher in the sport and will be a dangerous proposition for any opponent, including Joshua, as long as he is in his athletic prime. Over 12 rounds, for all his technical foibles, the punches will get there.

But the brash Alabaman turns 34 in October and there are worries a fight will happen when it is no longer truly significant – not unlike the song and dance between Floyd Mayweather and Manny Pacquiao.

Yet Joshua insisted the Wilder fight is secondary to the objective of unifying the major title belts for the first time since Lennox Lewis in 2000.

“It’s not so much about Wilder, it’s more about what I can achieve. When we look at what we’re doing in terms of working outside of boxing, commercialising the sport – even if I fought Ortiz, it could be a fight of the century anyway, because it’s undisputed.

“Wilder’s still building his profile. It’s not so much about Wilder, it’s the undisputed. It could be Ruiz and Ortiz, it’s still a massive fight for the undisputed. It’s just that we’ve worked tirelessly to build a profile outside of boxing, so when it does happen, it’s already at the pinnacle of where it should be commercially. We’re not, like: ‘Now the undisputed’s here, let’s promote it.’ We’ve been promoting this for years.”