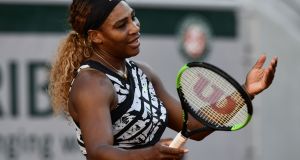 Serena Williams’s quest for a record-equalling 24th Grand Slam singles title was put on hold on Saturday after the former world number one was knocked out of the French Open in the third round following a 6-2 7-5 defeat by fellow American Sofia Kenin.

Chasing Margaret Smith Court’s all-time record, which was built over the amateur and professional eras, Williams failed to recover from a woeful opening set on Court Philippe Chatrier.

In the players’ first meeting, world number 35 Kenin pulled Williams around the court and made the most of her opponent’s unforced errors to set up a last-16 encounter with Australian eighth seed Ashleigh Barty.

Williams, who won the last of her 23 Major singles titles at the 2017 Australian Open, suffered her earliest Grand Slam exit since Wimbledon 2014.

“It’s a lot of emotion, she’s such a great player, a true champion, so much respect for her,” said Kenin, who was booed by a fraction of the crowd while Williams left the court to a standing ovation.

“Playing against Serena, you’ve got to fight for every point, she’s such a tough player, I’m so happy with this win.”

Kenin, who won her maiden singles WTA title this season in Hobart, made the most of Williams’s shaky start, breaking for 3-2 as the 10th seed sprayed the court with unforced errors.

Williams’s forehand was woeful and her opponent piled on the pressure to move 5-2 up with another break.

Serving for the set, Kenin thought she had bagged it when Williams returned long, only for the umpire to rule her serve out.

Kenin smacked the netcord with her racket in frustration, drawing jeers from the Paris crowd, before regaining her composure and wrapping it on her second opportunity.

Williams was broken to love in the first game of the second set and looked nothing close to finding a solution against Kenin’s pace.

She screamed her lungs out after winning the first two points of the following game, but Kenin was not impressed and snatched her seventh consecutive game.

Williams was hitting short, however, allowing Kenin to step into the court and dictate play. But in the sixth game, Williams finally broke to level for 3-3 as Kenin showed more signs of nerves, disputing several calls from the umpire or the linesmen.

It was her way to stay in the game, however, and she claimed the decisive break for 6-5 with a lighting-quick service return that left Williams stranded.

Kenin missed a forehand on her first match point, and it was Williams who handed her the win when she sent a backhand long, filling the youngster’s eyes with tears.

The weight of expectation has finally been lifted off Naomi Osaka’s shoulders.

The 21-year-old Japanese player entered Roland Garros as world No. 1 for the first time and had been trying to achieve something no-one else has ever done: having won her first two Majors, winning a third in succession.

Playing the 27th-seeded Katerina Siniakova in the third round – a match-up between the No 1 singles and doubles players – Osaka crumbled and lost in straight sets, 6-4 6-2.

Competing on the high-bouncing clay, not her preferred surface, under such scrutiny had been tough for Osaka, who one year ago was ranked 70th in the world.

“I just feel like there has been a weight on me,” Osaka told reporters after the Czech ended a 16-match win streak in the Grand Slams. “That’s because everything is sort of new. I have played the French Open before but not in this circumstance or situation, whichever one.”

Hugely popular in her native Japan with a string of lucrative corporate endorsements, Osaka has been getting used to her new status.

“This tournament I have had a feeling that was different to the other Grand Slams, or every other Grand Slam that I have played, because usually I find it very freeing and fun, and this time around I was kind of tense the entire time,” she said.

Having rallied after losing the first set in her opening match against 90th-ranked Slovakian Anna Karolina Schmiedlova and in her second-round tie with former world No 1 Victoria Azarenka of Belarus, Osaka never settled against 23-year-old Siniakova, the reigning Wimbledon and French Open doubles champion.

“I would just say I’m very disappointed in how I played, and I wish I could have done better,” said Osaka, who got broken three times, made 38 unforced errors and struck 25 winners.

One of the most aggressive players in the women’s game, Osaka squandered all seven break points she created in the first set.

“My returns weren’t great at all today,” she said. “I knew that I was flat. I knew that if I stayed in the rallies on the forehand side, I would probably definitely, 99 per cent of the time, win the rally. But for some reason I kept switching down the line and doing really weird stuff.”

Still, Osaka said she is leaving Paris with a positive mindset.

“It’s weird, but I think me losing is probably the best thing that could have happened,” she said.

“I was overthinking this calendar Slam. For me this is something that I have wanted to do forever, but I think I have to think about it like if it was that easy, everyone would have done it. I just have to keep training hard and put myself in a position again to do it, hopefully.”

John McEnroe slams Margaret Court as ‘crazy aunt’ of tennis 16:36
Stokes and Wood lead England to series win in South Africa 16:18
FA say Liverpool knew about timing of potential FA Cup replay 16:28
Sports Extra customers get every LaLiga match at no extra cost 15:02
Six Nations: Pundits, journalists and players have their say 15:00
Here is your handy guide to sport on television this week