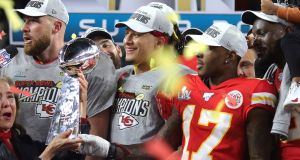 In the build-up to Super Bowl LIV we were repeatedly told that Patrick Mahomes is the future of the NFL. After he led the Kansas City Chiefs to a dramatic fourth-quarter comeback victory over the San Francisco 49ers on Sunday night, we can safely say he’s the present too.

“We never lost faith,” Mahomes said after the game. “That’s the biggest thing. Everybody on this team, no one had their head down. And we believed in each other. And that’s what we preached all year long and we had this guy [head coach Andy Reid] right here to get us there.”

On paper, this was the most promising Super Bowl match-up in years, with the average ticket going for just north of $5,000 on resale sites. The Chiefs, with the most terrifying offensive weapons this side of an Imperial Star Destroyer, against the 49ers, with their brilliant rushing game perfectly complemented by one of the best defenses in the league. While the Niners came in as the better team, the Chiefs had the best player, the multi-talented Mahomes, whose ability to make every throw in the book – and some that aren’t – while also making plays with his feet has helped redefine the quarterback position.

However, almost inconceivably after the brilliant postseason he had enjoyed so far, Mahomes struggled on the opening drive of the game, failing to complete both of his pass attempts, and the Chiefs were forced to punt. “I was making a lot of mistakes out there early,” Mahomes acknowledged after the game.

Some see the 49ers quarterback Jimmy Garoppolo, perhaps unfairly, as a weak link for his team: a competent, unspectacular quarterback, a cut-price Tom Brady, if you can call a man on $25m a year cut-price. But the Niners chose Garoppolo as their starter for a reason and he showed why as he combined with his strong rushing corps to set up the opening points of the game via a 38-yard field goal from veteran kicker Robbie Gould.

The Chiefs presumably weren’t worried about conceding an early deficit. They had, after all, clawed themselves out of a 24-point hole against the Houston Texans earlier in the playoffs. On the ensuing drive, Mahomes’ passing rhythm was once again off but he showed what elevates him above his peers when the Chiefs found themselves on the Niners’ goal line. He wriggled past defenders for the game’s opening touchdown. If his arm doesn’t get you, his legs will.

He didn’t have to wait long to see if he could get his passing game in order. Garoppolo threw a sloppy pass under pressure at the start of the second quarter and the Chiefs’ Bashaud Breeland picked the ball off. Mahomes’ first pass was launched deep for a 28-yard completion. His slump – if you could call it that – had lasted all of 15 minutes. San Francisco managed to stifle the drive but a field goal extended the Chiefs’ lead to 10-3.

The 49ers couldn’t afford to concede any kind of sizable lead to the Chiefs, who can embark on game-killing scoring runs once Mahomes and his receivers are on a tear. Salvation came in the form of Kyle Juszczyk, who plays fullback, a crude battering ram of a position so out step with the complexity of the modern game that some teams don’t even carry one on their roster. But Juszczyk is as close as you’ll get to a star fullback these days and he showed nice hands as he caught a touchdown reception off Garoppolo to tie the score at 10-10 going into the break, only the fourth half-time stalemate in Super Bowl history.

As the fans watched Shakira and Jennifer Lopez during the half-time show they could reflect on a hard-fought game if not the instant classic they may have expected given the build-up. Garoppolo, meanwhile, continued to hit his receivers. He reeled off five straight completions to start the second half and another field goal from Gould gave the team the lead for the first time since their opening drive.

The 49ers’ defensive line, bristling with first-round picks, had yet to cause Mahomes many problems. That wouldn’t last. He was sacked by Nick Bosa and fumbled for the second time in the game. Perhaps a little rattled, he then threw the ball into the welcoming arms of Niners linebacker Fred Warner. Garoppolo was again accurate when he got the ball in his hands and nearly connected with Juszczyk for another touchdown but the fullback was tackled on the one-yard line. Running back Raheem Mostert, who had considered a career as a professional surfer before committing to football, rumbled over for the touchdown shortly afterwards.

The Niners’ defense was also containing Mahomes, as much as anyone can, and slowed him down enough that the Chiefs entered the fourth quarter 10 points down. For the Chiefs, built to blow teams away with their speed and Mahomes’ fireworks, this was deeply unfamiliar territory, and the quarterback was about to crack again. Looking for the explosive Tyreek Hill he instead found the Niners’ Tarvarius Moore and San Francisco had the opportunity to put the ball in the hands of their running backs and run down valuable time.

When the Chiefs got the ball back, after San Francisco punted, there were just over eight minutes left and the 49ers’ lead was still 10. The game looked to be slipping away when the Chiefs had a third and 15 in their own territory. But the great players are great when it matters, and Mahomes found an open Hill for a 44-yard gain, and then a pass interference call on the 49ers put the ball on the one-yard line, the same spot where they had scored their opening touchdown. This time Mahomes threw rather than ran for the touchdown, connecting with tight end Travis Kelce. The 49ers led 20-17 with six minutes to go.

Mahomes was starting to look like the player who had dominated opposing defenses for the past two seasons. On their next possession, he seemed certain to be sacked by the 49ers but jinked away for a completion. Two plays later he hit Sammy Watkins for a 38-yard gain, and three plays after that he had thrown another touchdown, which was given after a long review by the officials. The frustration Mahomes causes opposing defenders is brutal. The Chiefs, had entered the quarter 10 points down, they now had a four-point lead, which ballooned to the final score of 31-20 after Damien Williams’ 38-yard touchdown scamper.

“It’s Magic Mahomes,” Kelce said. “It’s Showtime Mahomes. He’s going to be himself no matter what the scenario. And, you know what? I love him. He willed this team back into the game.”

The Chiefs had won their first NFL championship in 50 years, with their quarterback, who became the youngest Super Bowl MVP in history, at the heart of the victory. Football is a team game, but a player like Mahomes can make all the difference.