NFL round-up: Colts back in play-off picture thanks to a bit of Luck 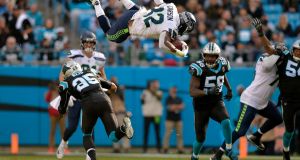 Andrew Luck has three Pro Bowl appearances and a passing touchdown title since being drafted first overall by the Colts in 2012 to replace Indianapolis legend, Peyton Manning.

In Luck’s first three seasons, he led the Colts to a 33-15 regular season record, guiding the team to the play-offs each year and advancing to the AFC championship in 2014, where the team was dominated, 45-7, against the New England Patriots.

Since that loss, the team - expected to be a perennial Super Bowl contender behind a young, generational quarterback - has fallen far short of its expectations.

The Colts mustered pedestrian 8-8 records in 2015 and 2016, and finished with a 4-12 record in 2017 without Luck, who missed the entire season to a mysterious shoulder injury.

Reports out of camp this preseason had Luck looking like a shell of himself, no longer surfeit with his formerly celebrated arm strength as the effects of shoulder surgery lingered. This former generational quarterback had forfeited his title as the future of the NFL, it seemed.

More questions about Luck’s shoulder surfaced during week three of this season, when back-up quarterback Jacoby Brissett replaced Luck to throw a Hail Mary pass in the final seconds of a 20-16 loss to the Eagles.

After the game, Luck and head coach Frank Reich assured the media of the franchise quarterback’s shoulder health, citing Brissett’s superior arm strength as the sole reason for his replacing Luck to attempt a pass from the Colts’ own 46 yard line.

It made for a reasonable explanation, but what team pays a quarterback $87 million guaranteed only to replace them on the last play of a match?

Losses to the Texans and Patriots in weeks four and five followed, but a week six loss to the downtrodden New York Jets was the true low point for Luck and the Colts. The team sat at 1-5, one loss worse than its 2-4 start in last season’s 4-12 campaign. The season looked lost for the second year in a row. A saviour, it appeared, Luck was not.

Something clicked for Indianapolis after that loss, however, as the team has rattled off five wins in a row, capped by Sunday’s 27-24 victory against Miami. Statistics point directly to the team’s quarterback play, which has vastly improved since week six.

During the five-match win streak, Luck has thrown 16 touchdowns against only three interceptions, and ranks second among starting quarterbacks to Drew Brees in quarterback rating. Luck’s 75.3 completion percentage over that time - up from 64.5 in weeks one through six - leads the NFL.

In Sunday’s contest against Miami, Luck finished with 343 passing yards and three touchdowns, and brought the team back from a 10-point deficit in the fourth quarter to win the match.

The Colts’ record is now 6-5, and the team is firmly entrenched in the AFC play-off picture, tied with the Ravens for the conference’s second Wild Card spot.

Despite 2017’s injuries and Luck’s slow start this season, the Colts are close to where they were during his first three seasons, and nearly every season of Manning’s illustrious Colts career from 1998-2011: the play-offs.

Although a Super Bowl appearance may not come this year, Luck is renewing hopes of Colts fans who may have thought this quarterback - and potential dynasty - were finished just five weeks ago.

In a game that could have serious NFC play-off implications, the Seattle Seahawks mounted two late fourth-quarter drives to down Cam Newton and the Carolina Panthers, 30-27. Trailing 27-20 with 3:26 to play, Seahawks quarterback Russell Wilson completed a clutch fourth and three pass to wide receiver David Moore for a 35-yard touchdown. An extra point by Sebastian Janikowski tied the game at 27-27.

With just over three minutes to play, however, Carolina had ample time to drive down the field for a score of their own. Newton led the Panthers to Seattle’s 34 yard line to set up a 52-yard field goal attempt, but kicker Graham Gano’s kick missed wide right, giving Seattle the upper-hand in the final minutes of the match. A 43-yard pass from Wilson to wide receiver Tyler Lockett on third and five put the Seahawks in position to run out the clock and kick a match-winning field goal. Unlike Gano, Janikowski converted his kick, nailing a 31-yarder to win the match as time expired.

A hurdle-turned-flip by Seahawks running back Chris Carson made a 14-yard scamper look more like an Olympic gymnastic performance than an American football play. The flip was in no way a match-winning play as it came early in the third quarter, but its entertainment value was unquestionable. Additional words will not do this play justice, as it is one highlight fans will have to see to believe.

Still chasing the Chiefs (9-2) in the AFC West, the Chargers (8-3) are looking like a Super Bowl contender fresh off their 45-10 drubbing of Arizona. The Steelers (7-3-1) will look to avenge an uninspiring week 12 loss to the Broncos and hold off the Ravens in the AFC North.

The match represents by far the best contest in the NFL during week 13, where only three of 16 games will be played between teams with winning records.