Sailing: Mulloy still on course to realise her ultimate ambition 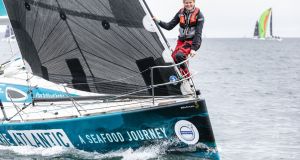 After her debut year as the first Irish woman to compete in the single-handed Figaro circuit, Mayo’s Joan Mulloy remains on course to realise her ultimate ambition of competing in the solo Vendee Globe Round the World Race in 2020.

Her twin high points of the 2018 season were starting the first leg of the French series and then completing the gruelling series of four stages comprising 1,600 nautical miles.

Like Meath sailor Tom Dolan on his own boat, Mulloy competed in the Rookie division that has been a rite of passage for dozens of high-profile professional ocean sailors for the past four decades.

And similar to achieving a result in the Figaro, the holy grail of short-handed and solo racing is a successful entry in the Vendee Globe Race, the non-stop unassisted race around the world that is next scheduled for 2020.

No Irish sailor has completed a non-stop race around the world and Mulloy’s ambition is to continue her ‘first Irish-woman’ record in the Figaro up several gears to the full circumnavigation.

Next step on this journey will be another full year in the main fleet of the Figaro circuit for 2019 but with a difference as the third-generation class of the boat is set to be introduced for the coming season.

With her charter fee paid, Mulloy is planning to take delivery of a brand-new foil-assisted Figaro 3 early in 2019 just weeks before the first warm-up event in March.

The new technology improves performance by around 15 per cent though a learning-curve is expected as most of the sailors have yet to sail the new type of design. However, that fact helps level the playing-field a bit according to Mulloy, though the downside of the new boat is an increase in equipment and sail costs.

After securing Bord Iascaigh Mhara for her debut year on her ‘Taste the Atlantic – a seafood journey’ branded entry, Mulloy is once again on the sponsorship trail.

Meanwhile, although the pathway to the 2020 Vendee Race is well-trodden with Figaro leading to the Transatlantic Jacques Vabre Race, less clear is the route to the Paris 2024 Olympic Games when a double-handed, mixed offshore event is slated for inclusion.

The format and boat type have yet to be announced so no Irish sailors have yet to formally declare an interest. The addition of an offshore racing event at the annual World Sailing conference earlier this month attracted a mixed response.

Selection of an offshore/distance event came about by eliminating the Finn dinghy in the Heavyweight Men’s event, a move that dismayed many athletes who weigh more than 85 kg and are taller than 1.8 metres.

However, the move has also been welcomed as being representative of another major department of the sport and is an area that Ireland has good representation depending on how it is eventually formatted.

But if the event in any way matches the profile of the Figaro circuit, then Mulloy is definitely interested she told The Irish Times yesterday.

And as the event is mixed, given her likely experience even at this remove to the Paris games, she is likely to be a go-to person for the female side of a duo.

Mulloy and Dolan half-joked about a prospective team recently but given the lack of details at the stage, nothing has yet progressed.

This column also speculated that a potential Irish dream-team might include ocean-racing veteran Damian Foxall, a former Figaro Rookie winner and winner of multiple round the world races and distance speed sailing records.

The Kerry-based sailor welcomed the inclusion of offshore racing to the Olympic Games and didn’t rule himself out though, like Mulloy and Dolan, he also awaits release of information on the format of the event.

Meanwhile, as the modern offshore sailing future prospects open up, Ireland is set to lose its last sail training vessel. Built in 1971, the 70-foot, 50-tonne steel Spirit of Oysterhaven has “reluctantly” been put up for sale after 20 years in use in Irish and international waters.

“Running both the vessel and the sail training programme was a huge undertaking for a small company such as ours – particularly as we were running the whole operation as a ‘not for profit’,” said Oliver Harte yesterday.

“While we have proven that it is a viable option to run regionally based sail training operations around the country it needs the commitment and backing of a wider range of stakeholders.

“While we will be very sad to see Spirit go after so many years this will free me up to focus on the continuing successful development of Oysterhaven Activity Centre. Here’s hoping that she finds a new home in Ireland where she will be equally treasured!”