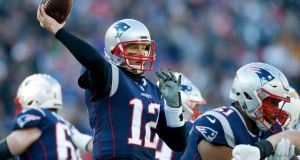 After Sunday’s dominant 41-28 divisional-round victory over the favoured LA Chargers, New England Patriots quarterback Tom Brady acknowledged his team was now an underdog, telling a CBS reporter that “everybody thinks we suck and can’t win any games.”

The Patriots, an organisation defined by dominance and postseason success over the past two decades, sit in the role of the underdog for perhaps the first time since the franchise won its first championship in 2001 during Brady’s second season in the NFL.

It is unfamiliar for New England and football fans alike, who over the the past 18 years have expected the Patriots to win each and every match despite what challenge awaited them. Throughout this season, however, it appeared ‘Father Time’ had caught up to Brady, as his statistical rankings were well below his career averages and painted a picture of a quarterback finally in the twilight of his career.

In Sunday’s match against the Chargers, regular season statistics and projections for the contest carried no weight in determining the contest’s outcome. What was apparent on Sunday, however, was how prepared the Patriots were and how well they have adjusted this season despite Brady’s declining arm strength and accuracy.

Often overlooked when a team has a great quarterback are the game plans coaches orchestrate and the in-game adjustments they make, both of which make up the true artistry and nuance of a well-played football match.

The balance of Bill Belichick-coached teams has long been under appreciated because of Brady’s greatness, but came to light on Sunday as the team relied on other key pieces instead of letting Brady’s physical limitations take centre stage.

Philadelphia embraced the role as the underdog last postseason and rode it all the way to the franchise’s first Super Bowl victory. This postseason, a new unsuspecting juggernaut is in town, although history indicates Brady, Belichick and the Patriots should look more like wolfs dressed in sheep’s’ clothing than David trying to shoot down Goliath with a slingshot.

Football savvy in the playoffs, much like tenacity at an NFL draft combine, cannot be measured and projected upon appropriately, as proven by Brady and the New England coaching staff throughout Brady’s career.

That same savvy and tenacity will need to drive the Patriots to their biggest match of the season next week, as the Kansas City Chiefs await with a trip to the Super Bowl on the line.

Drew Brees’s first pass of the game was intercepted and the Eagles held a 14-0 lead after the first quarter, but ball control, staunch defence and timely scoring helped the Saints bounce back to clinch their first NFC Championship appearance since winning the Super Bowl nine seasons ago.

After the slow start, Brees led the Saints on scoring drives of 79, 67 and 92 yards, the last of which lasted 18 plays, 11 minutes and 29 seconds, making it the longest playoff touchdown drive in the past 20 seasons. Even more impressive was the Saints defence, which forced five punts and two interceptions after allowing two consecutive touchdown drives to begin the match.

Trailing 20-14 in the fourth quarter, the Eagles had one last chance and appeared to be mounting a scoring drive before the Saints defence came up with its biggest play of the year on a Nick Foles pass intended for Alshon Jeffrey.

The ball slipped through the typically sure-handed wide receiver’s hands and into those of Marshon Lattimore for the cornerback’s second interception of the night, this one all but clinching the match for New Orleans.

Unlike in the regular season, the most noteworthy plays of the NFL playoffs are situational and based on strategy rather than sheer athleticism. While New Orleans’s 11-minute, 29-second touchdown drive that took up most of the third quarter represented a collection of plays rather than one outstanding athletic effort, its importance cannot be overstated. By keeping the ball out of Nick Foles’s hands in the second half, the Saints’ attack served as their best defence while simultaneously demoralising an Eagles defence that appeared listless throughout the fourth quarter.

When the Patriots handed the Chiefs their first loss of the season in a 43-40 week-six shootout, many NFL pundits predicted the two teams would meet again in the AFC Championship. The stage is now set for the ageless wonder Tom Brady to take on likely league MVP Patrick Mahomes in a match of greater consequence, only this time Brady will have to venture out of the frosty confines of Gillette Stadium and into Kansas City’s raucous Arrowhead Stadium, the loudest in all of sports. The 11:40pm (GST) match will pit two of the most successful NFL coaches in history - Bill Belichick and Andy Reid - against each other in what could be a legacy-defining match for both coaches.

Team Rankings (based on points for/against during the regular season)

Another regular season rematch takes place in the NFC, as the Rams will hope to avenge a 45-35 week-nine loss to New Orleans in which LA running back Todd Gurley was held to only 79 yards from scrimmage. The winner of this 8:05pm (GST) match will likely be determined by which team can create a crucial turnover or defensive stop, as both high-octane attacks figure to be humming with touchdown drives throughout the contest. The Saints appear to have the advantage on paper, but LA’s defensive front led by 2017 NFL Defensive Player of the Year Aaron Donald could be a game plan wrecker for Sean Payton’s eclectic attack.