Tearful Andy Murray: Australian Open could be my last tournament

Andy Murray may retire after the Australian Open, with the severe pain from his troublesome right hip having become almost unbearable for him to play on, the former world number one said on Friday (January 11). 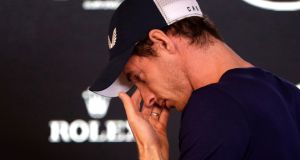 A tearful Andy Murray says the Australian Open could be his last tournament because of a hip injury that has hampered him for almost two years. Photograph: AP

Andy Murray’s career is all but over. He expects his match against Roberto Bautista Agut in the first round of the Australian Open on Monday to be his last but, even if another hip operation were to help him reach a more emotional and perhaps more fitting farewell at Wimbledon, it will never be the same for the player who stood alongside Fred Perry as the greatest Britain has ever had. Many would say Murray was the greater, but it is a fine call.

The former world No1 and three-time slam champion conceded that the pain that has been running through his right hip with increasing strength the past few months has brought his serious playing days to a reluctant conclusion.

Murray turns 32 on May 15th, when he would normally be preparing for another assault on the French Open – which is where the chronic weakness in his hip became almost unbearable in 2017 against Stan Wawrinka – but the chances of his returning there are virtually nil, as he admitted in a press conference in which he had to leave the room to compose himself, as the emotion welled in his reddening eyes.

“There’s a chance of that, for sure,” he said when asked if this tournament – in which he has lost in five finals – would be his sign-off from the game he has played since he was 10 in Dunblane.

“I am not sure I am able to play through the pain for another four or five months,” he said of his original plan to bow out at the All England Club, where he won two of his three majors.

It was a year ago in Melbourne that Murray reluctantly agreed with his long-time medical confidant, John O’Donnell, a leading hip specialist, that he needed an operation to continue playing. It did not quite work, but he gave it as good a shot as he could muster, playing 12 matches, winning five, but only two against top 20 opponents. It became increasingly obvious that his ability to compete at the highest level was waning.

The moment it fully dawned on him arrived in December during his preparation for Melbourne. The pain was now insistent and deep. There was no relief, even in everyday activities.

Murray now has to confront more surgery to repair the damage of nearly a dozen years at the top of the game.

“I have an option to have another operation, which is a little bit more severe than what I have had before,” he said. “Having my hip resurfaced will allow me to have a better quality of life, be out of pain. That is something I’m seriously considering right now. Some athletes have had that and gone back to competing. But there are obviously no guarantees with that, and it is not something…the reason for having an operation is not to return to professional sport, it’s just for a better quality of life.”

He added: “I’ve been struggling for a long time. I have been in a lot of pain for probably about 20 months now. I have pretty much done everything that I could to try and get my hip feeling better. It hasn’t helped loads. I’m in a better place than I was six months ago, but still in a lot of pain. It has been tough.

“In the middle to the end of December in my training block, I spoke to my team, and I told them, ‘I cannot keep doing this.’ I needed to have an end point because I was playing with no idea when the pain was going to stop. I felt like making that decision. I said to my team, ‘Look, I think I can get through this until Wimbledon. That’s where I would like to stop playing.’ But I am not certain I am able to do that.”

“Tough” has been Murray’s watchword in a career that seemed eternally embroidered in struggle. Very little came easy. But he is steeling himself for what is “almost certainly” one last effort, against the Spaniard Bautista Agut, who has lost to him in their three previous meetings but is likely to win on Monday.

“Yes, I am going to play,” he confirmed. “I can still play to a level, but not a level I am not happy playing at.” Roger Federer remarked in London in November that Murray looked to be playing “top 30” tennis, and might even improve on that. It is not a place Murray would be happy, though. Now he has to deal with Bautista Agut.

In his last tournament, Bautista Agut beat Stan Wawrinka, Novak Djokovic and Tomáš Berdych to lift the title in Doha. Monday’s match could be an ugly spectacle, but Murray will give what he has left all the way to the end.

“You guys see me running around a tennis court, walking between points,” he said of his now trademark limp. “I know it doesn’t look good and it doesn’t look comfortable. There are little things, day to day, that are also a struggle. It would be nice to be able to do them without any pain – putting shoes on, socks on, things like that.

“That’s the main reason for doing it. If I was to have an operation for that, I would rehab correctly, do it properly to give my hip the best chance at being good as it can be. But I am also realistic. I know it’s not an easy thing to come back to or play professional sport to a high level. I mean it has been done; Bob Bryan had this operation post-Wimbledon last year and he is back playing. I have had lots of communications with him about it. But there is a difference between singles and doubles in terms of the physicality and the movement. Certainly no guarantees there.”

And, no, he would not contemplate a career in doubles. For now, and probably forever, it is over. He will be hugely missed – by fans, rivals and even the media he occasionally jousted with in one of the most entertaining and interesting careers in the history of British sport.