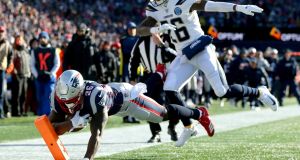 Sony Michel of the New England Patriots scores a touchdown during the first quarter of the AFC divisional playoff against the Los Angeles Chargers Game at Gillette Stadium in Foxborough, Massachusetts. Photograph: Adam Glanzman/Getty Images

Scoring touchdowns on their first four possessions, the New England Patriots established a 35-7 half-time lead and cruised to a 41-28 win over the Los Angeles Chargers in an AFC divisional round game at Gillette Stadium in Foxborough on Sunday.

The result sends New England (12-5) to Kansas City next Sunday to play for the AFC title and a trip to the Super Bowl on February 3rd. The two sides met in week six of the regular season, with the Patriots securing a 43-40 win in Foxborough.

Sunday’s win also gave the Patriots a perfect 9-0 home record this season and put them in the conference championship game for eighth consecutive season, extending an NFL record.

Los Angeles finished its season with a 13-5 record, after recording its first playoff win since January 2014 last week.

But on this day, the Chargers couldn’t come close to replicating last week’s wildcard round victory in Baltimore. The Patriots carved up Los Angeles’ defence for drives of 83, 67, 58 and 87 yards to start their day. When the Chargers finally stopped them, they fumbled the ensuing punt and the Patriots recovered, before going 35 yards for a fifth touchdown just before half-time.

Every aspect of New England’s offense did its job. Tom Brady completed 34 of 44 passes for 343 yards and a 15-yard scoring strike to Phillip Dorsett with 12:17 left in the second quarter. Rookie running back Sony Michel pounded out 129 yards on 24 carries, reaching the end zone on runs of 1, 14 and 5 yards.

Brady made liberal use of running back James White and wide receiver Julian Edelman – White caught 15 passes for 97 yards, and Edelman added nine catches for 151 yards, a franchise-record fifth 100-yard game in the playoffs.

“The line played great, and I thought we did a good job keeping them off-balance,” Brady said to CBS. “It’s that time of year where you have to play your best. We’ve got a big one next week.”

Defensively, the Patriots made the Chargers one-dimensional with their first-half explosion. Running back Melvin Gordon managed only nine carries for 15 yards and a third-quarter touchdown, forcing Philip Rivers to carry the load.

Operating under duress all day, Rivers completed only 25 of 51 passes for 331 yards and three scores with an interception. New England recorded only two sacks, but hurried and harassed the quarterback throughout the afternoon.

“This wasn’t the ending we wanted, but one game doesn’t define the type of season this team had,” Chargers head coach Anthony Lynn said.