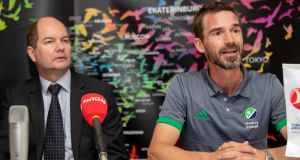 Hockey Ireland CEO Jerome Pels remains tight-lipped for the time being about the status of the senior men’s coach as the side looks forward to the Olympic qualifying process this year.

Dutchman Alexander Cox took on the role on an interim basis last summer ahead of December’s World Cup, combining it with his job with leading club side SV Kampong.

Pels says the national body are currently in “the process of evaluating the World Cup campaign and the future programme” with no confirmation of whether Cox would or would not be in situ.

The World Cup campaign felt like a missed opportunity as Ireland pushed the world number ones Australia all the way but came unstuck in a 1-1 draw against China that, in the end, put paid to their knockout stage hopes.

For Tokyo 2020, Ireland’s qualification route sees them travel to Le Touquet, France, in June for the Hockey Series Finals where they will require a top-two place to be guaranteed a head-to-head qualifier series in the autumn.

Add in August’s European Championships and it is a hectic year for the side.

Captain David Harte is already back in action for the new year as he links up with the University of Kuala Lumpur for the professional Malaysian Hockey League during the Dutch league’s winter break.

He played in their 2-1 win over THT in their opening game alongside two Dutchmen and a couple of Australians for the competition which runs during the European winter break.

On home turf, Railway Union moved into a share of Leinster Division One’s lead with UCD with a 3-0 win over Portrane despite a series of absentees. Rob Devlin, Adam O’Callaghan and Michael McKenzie got the goals.

In Munster, Julian Dale’s incredible goalscoring run continued with a hat-trick moving Harlequins top of Munster Division One in a 5-2 triumph over Catholic Institute.

Dale had played until October in Belgium before returning to Cork for the winter break. He had planned to return to Brussels for the second phase of the campaign but that has been blocked by a local rule that does not allow for players to line out at regional level in other countries during the break.

The rule is not in place in Germany and the Netherlands and has seen women’s internationals Katie Mullan and Megan Frazer play in Ulster competitions recently.

Indeed, two Belgian indoor internationals have also been barred from their national competition for playing in an exhibition match in South Africa, showing the strictness of the rule.

For Dale, it means he will remain in Ireland for the rest of the season and his 18 goals already look like securing an EYHL2 spot for Harlequins.